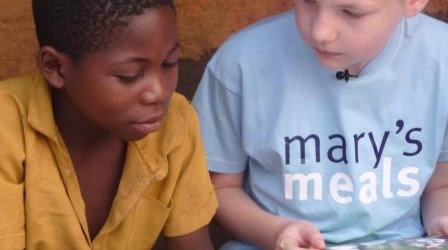 MARTHA Payne, a ten year-old schoolgirl from Argyll, has been announced Scot of the Year 2012 by ScotsCare, the charity for Scots in London.

Martha was on the list in recognition of her fantastic fundraising campaign to support schools in Malawi through her blog about school dinners, which has raised more than £120,000. She has since visited to Malawi to see for herself what the money she has raised is doing to help impoverished schoolchildren.

Second in the poll was Andy Murray, who of course had a brilliantly successful 2012, winning the US Open and becoming the first British Slam Winner since 1936 and also winning Olympic Gold. Sir Chris Hoy was in third place, for his outstanding sporting prowess at the Olympics.

When we contacted Martha, she said: “’Wow! Thank you. It’s very special to be awarded Scotscare Scot of the Year. I wish everyone in the final could have won as well because they’ve all put smiles on so many people’s faces this year. It is very kind that people have voted for me. I’ve only done a little bit and lots of people have helped by doing a little bit as well. I’d like to share the award with everyone that has donated and all the kids in Malawi that we are supporting with Mary’s Meals and especially those at Lirangwe where the ‘Friends of NeverSeconds’ kitchen is.

I know dad has bought a haggis for tea because I have seen it in the fridge. I love haggis and we’ll celebrate with that tonight! Thank you.”

The full shortlist was:

ScotsCare chief executive, Willie Docherty, said: “Every year we ask for your Scot of the Year and this year in particular I think has highlighted the range and diversity of Scots talent. We have had nominations from politics, sports, music, acting, writing and comedy. I think Martha is an excellent choice and a beacon not only to her generation, but to all Scots across the globe.”

ScotsCare is the charity for Scots and the children of Scots in London in need, hardship or distress. Voting was held through the ScotsCare website and Facebook page.

ScotsCare is the charity for Scots in London in need, hardship or distress.