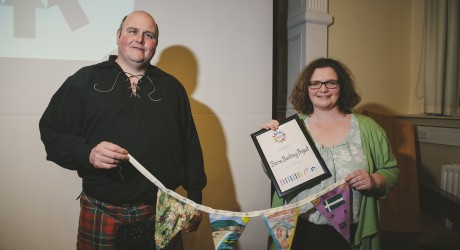 AN inspirational craft project on the Isle of Barra has won the second Scottish Epic Award.

By reaching out to the rest of the world, and engaging people locally, the Barra Bunting Project proved how the arts and crafts can bring people together on a global scale.

The Epic Awards are designed to highlight excellence and innovation in amateur arts groups across the UK and Republic of Ireland, and are an initiative of Voluntary Arts.

The Barra Bunting Project was created by the organisers of the Barra and Vatersay Island Produce Show, and invited anyone who had ever set foot on the Isle of Barra and/or Vatersay to get involved.

Local workshops at schools, day centres and markets gave people the chance to get creative and make colourful bunting flags to decorate the Produce Show.

Meanwhile, people from Australia, the USA and Europe  sent in their contributions.

Each flag was accompanied by information about the person who made it – including a man from Ohio who created, and hand-delivered, a flag in memory of his father who visited Barra many years ago.

The 2013 Epic Awards were presented at a prestigious reception in Derry/Londonderry  on Thursday 31 January, attended by Northern Ireland Junior Minister Jonathon Bell from the Office of the First Minister.

“Scotland is renowned for its warm people and its warm welcome. This project has embraced these principles by reaching out across continents to those who have poignant memories of their connections to Barra.

“I’m delighted that Voluntary Arts Scotland’s continuing support for groups like Barra Bunting is enabling even more people to get involved in creative activities and bringing communities together to show their individuality, ingenuity and imagination.”

Collecting the award on behalf of The Barra Bunting Project, Sarah McLean said:

“We are overwhelmed and honoured to win this prestigious EPIC award.  This will act as a fantastic platform on which to develop the project further and we look forward to receiving more bunting from people who have set foot on Barra and Vatersay.”

The runner-up of this year’s Scottish Epic Award was The Craw’s Nest Project in Stonehaven, Aberdeenshire, which brought together adults and children to create a colourful mosaic, turning a dull landmark into an attraction for locals and tourists alike. The People’s Choice Award, voted for by the public, was won by Forth Bridges Accordion Band for bridging a gap in the Scottish music scene and bringing generations together.

As well as their awards, winners also received prizes including cash, vouchers for arts and craft supplies, mentoring sessions and memberships.

Case studies featuring the winners, runners-up and other entrants from across the UK can be found at www.epicawards.co.uk

The Epic Awards are an initiative of Voluntary Arts and aim to identify and promote excellent art and craft practice that exists within the voluntary arts sector.

Arts Development UK is a professional association, with a membership drawn from local authorities and those working in the creative industries sector in England and Wales. Their objectives are to offer practical advice, networking and support to the profession, and to advocate for the important contribution that the arts and creative industries make to today’s crosscutting agendas, such as social inclusion. http://artsdevelopmentuk.org

GreatArt has what is believed to be the UK’s largest range of art materials. Still very much a family business, GreatArt prides itself on the experience and expertise of its managers and staff whose specialist knowledge of the art supplies industry helps to ensure the efficient operation of Europe’s most comprehensive and competitive one-stop shop for quality art materials. http://www.greatart.co.uk/