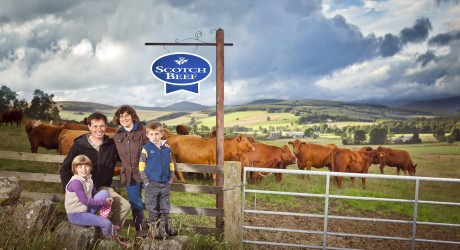 The campaign aims to reach around 5.3 million consumers in the target audience for the Scotch Beef brand which is underpinned by strong traceability and quality assurance. To be described as Scotch Beef, animals must have been born, reared and slaughtered in Scotland.

Two different advertising styles are being combined in the £620,000 campaign, co-funded by the European Union, which features ‘Great Quality of Taste’ adverts using Scotch Beef imagery and ‘Get Behind the Label’ adverts involving the two farming families.

The campaign will run over the next eight weeks in line with advice on timing from the industry with activity being undertaken in the key Scotch Beef markets of Scotland  and Greater London.

The key elements of the push include poster adverts sited to reach road and rail travellers in greater London and Scotland. The on-line advertising includes a video ad on target websites.

The importance of digital communications continues to grow for the brand with more than 40,000 consumers having now downloaded the free ‘perfect steaks and roasts’ app and more than 7,000 Facebook followers.

In-store promotion and tasting sessions will take place in key retailers with Scotch Beef brand ambassadors taking part in around 120 promotion days GB-wide. Adverts will also appear in target print media during the course of the campaign.

The farmers featured in the ‘Get Behind the Label’ adverts are the McGowans of Incheoch Farms in Glenisla and the Flemings of Aberbothrie farms near Alyth. Both families take immense pride in producing top quality cattle.

The farming enterprise at Aberbothrie is run by George Fleming in partnership with his wife Lynne, son James and mother, Margo.

James (28) is the fifth generation of the family to be involved in the farm business which includes 200 suckler cows, mostly Simmental crossed with Belgian Blue and Aberdeen Angus as well as potatoes, barley and oilseed rape.

Health and welfare is a priority for the family who are supported by full-time stockman, Eric Simpson. The main calving period gets underway this month and is one of the periods on the farming calendar which George Fleming finds most rewarding.

“Working with the cattle is the side of the business I find most satisfying.

“There is nothing quite like the sight of calves suckling contented cows at this time of year,” said Mr Fleming.

Neil McGowan (37), farms with his wife Debbie, parents, Finlay and Judy and sister, Clare. Neil and Debbie are pictured with children Tally (8) and Angus (7) in one of the photographs being used in the campaign.

The McGowans run 200 cows of which 60 are Simmentals with the rest Luings. The family sell Sim/Luing heifers for breeding along with store cattle through United Auctions at Stirling.

Neil McGowan has no regrets about his choice of career. “A lot of people have nine to five jobs and need the weekend to unwind.

“My hours are a lot longer and I don’t have those weekends off but I love what I do and, most of the time, it is quite a relaxing occupation.

“There’s nothing better than seeing happy cows with their calves in their natural environment, with wildlife around them. It is a beautiful place to work!”

Suzie Carlaw, Quality Meat Scotland marketingcController, said the 2013 campaign builds on the success of previous campaigns which have achieved record brand awareness for Scotch Beef in London. In 2012 Scotch Beef was revealed to be the largest selling Scottish food and drink brand in GB by leading research agency, Kantar Worldpanel.

“This campaign involves two very different but complimentary creative approaches – one featuring the product and the other the behind the scenes ‘back story’.

“Our research tells us that this approach is successfully magnifying the reach of our message to consumers. Over the next two months shoppers will see around 600 advertising posters displayed across Scotland and almost 400 panels at target sites in Greater London.”

Photo caption: The McGowan family who feature in the new ‘Get Behind the Label’ adverts. L-R: Tally, Neil, Debbie and Angus McGowan.