Media Release: From recruitment to the racetrack 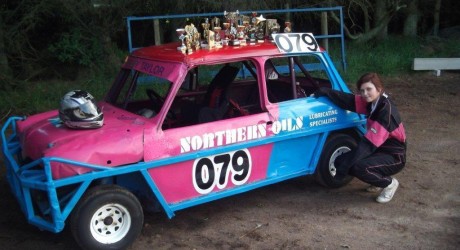 WE all have our own way of unwinding after a hard week at work, and one employee from a leading North-east recruitment agency has an exciting way to help ‘blow away the cobwebs’ at the weekend.

In her spare time, Genesis Personnel assistant recruiter, Shelley Taylor, likes nothing better than speeding around racetracks in her stock car.

She has been a fan of racing since she was 13, and spends most weekends at her home track in Crimond or travels to Cowdenbeath for a full weekend of driving.

Since joining the Genesis team in July 2011 as a trainee administration assistant, Shelley has worked her way through the ranks and her role  now involves employing both temporary and permanent staff for various roles.

Shelley said: “I love my job and meeting people, but I really enjoy making time for my hobby.

“I got into stock car racing as both of my parents raced in their youth, and we went to watch the racing every second weekend when I was growing up. I enjoyed it so much that my dad decided to build me my very own PINK ministox.”

She said: “When I turned 16, I moved onto the next formula, and my friend Steven was kind enough to offer me his stockcar to race in the ladies section, so this let me continue with my hobby. This also meant I had to say goodbye to my little pink mini and hello to a two-litre engine.

“My first achievement in the Crimond Saloonstox formula was last year when I achieved third in the Ladies Saloonstox Championship and I hope to do well again this year.”

She is gearing up for the new season, which starts again in April, with the help of her friends and family.

“I have to admit that if it wasn’t for my two mechanics, my dad and my friend Steven, there would be no racing for me. I’m not very educated in cars, I just turn up and race.

“My hobby most definitely helps me unwind after a week at the office.”

Genesis Personnel managing director, Wendy Marr, added: “Shelley is very special to us at Genesis. She is an extremely bright and talented individual and is a delight to have in the office.”