Media Release: Scottish brothers race from Peking to Paris in memory of their father 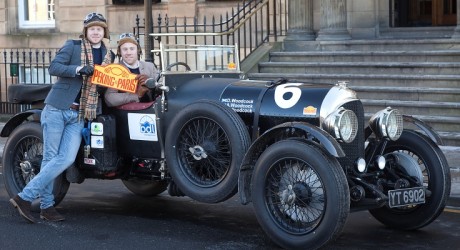 TWO Scottish brothers will take on the challenge of a lifetime when they race from Peking to Paris in memory of their father.

Daniel and Antony Woodcock, whose father Louis was diagnosed with cancer in 2010, will take his place in the Peking-to-Paris Rally to raise money for Sarcoma UK. Kicking off on 28 May 2013, and crossing two continents, the 33-day endurance race is the longest and toughest race for classic and vintage cars.

With no previous rally or mechanical experience, the pair will take on some of the world’s most inhospitable terrain in their father’s pride and joy; a vintage 1927 Bentley.

Starting at the Great Wall of China, the route spans 12,247 kilometres (7,610 miles) through Mongolia, Russia, Ukraine and into Europe where a triumphant finish in Paris awaits. It is only the fifth time since 1907 that the race has taken place.

Louis – who lost his battle with Myxofibrosarcoma in September 2012, aged 54 – had a lifelong love of heritage motor cars.

Despite undergoing surgery to amputate his left arm as a result of the cancer, he had secured a place in the rally and planned to compete in his favourite car.

Daniel Woodcock, 25, explained that after his father passed away, he and his brother were determined to complete the rally in his name.

He said: “Anyone who knew our father will be more than aware of his positive ‘gung ho’ attitude towards life, his love of speed and his passion for adventure.

“He put a great deal of time and effort into preparing himself, and at times it even drove him to go on.

“That is why Antony and I have pledged to finish this challenge in his memory, and hopefully we will be able to raise as much money and awareness as possible for Sarcoma UK.”

Adds a spokesperson: “Sarcomas are rare cancers that develop in the supporting or connective tissues of the body such as muscle, bone, nerves, cartilage, blood vessel and fat.

“Sarcoma UK is the main charity in the UK dealing with all types of sarcoma and relies solely on voluntary donations to fund vital research projects into sarcoma cancers.”

BDL Management, the Glasgow-based hotel management company founded by Louis in 1997, is supporting Daniel and Antony throughout their preparations.

In addition to financial backing, the business has pledged the time and expertise of its marketing team to help raise awareness of the cause.

To find out more about Daniel and Antony’s epic challenge and to follow their progress, visit the official Team Woodcock website at www.teamwoodcockp2p.co.uk