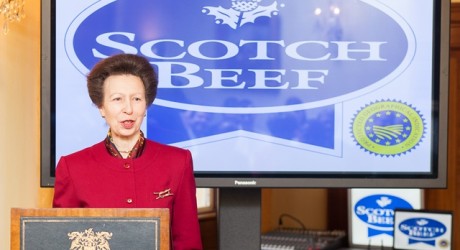 THE dedication and skills of those involved in the production of top quality Scotch Beef were showcased at an event in London today (March 26, 2013) attended by HRH The Princess Royal.

Among those present at the Scotch Beef Club event run by Quality Meat Scotland were Robert and Jacqueline Neill who farm at Upper Nisbet Farm near Jedburgh and are the holders of the first Scotch Beef Farm of the Year Award title.

The couple were congratulated by the Princess Royal, who is president of the Scotch Beef Club, for epitomising the dedication to be found in the production of top quality beef.

Among those the Princess Royal also heard from at the event was Louise Forsyth, of Forsyth of Peebles, the butcher who supplied the Scotch Beef from the Neill family at Upper Nisbet.

Master butcher Viv Harvey demonstrated a range of alternative cuts from Featherblade, which is a forequarter cut traditionally used for braising, to D Rump, a large cut from the top of the leg and rump comprised of at least five muscles, of varying tenderness.

Addressing the gathering after the demonstration, HRH The Princess Royal said the event the brought into focus the “underuse of a very valuable resource and the need to make the best use of the whole carcass”.

She had also clearly enjoyed the tutored tasting session highlighting the variety of taste experiences. She also acknowledged the influence of different varieties of grass and terrain on the flavour of the meat produced.

Jim McLaren, chair of Quality Meat Scotland, said the overall aim of the London event was to reinforce the message about what makes Scotch Beef special and to encourage chefs to think more about the meat products they choose.

“Each link in the supply chain involved in the production of Scotch Beef – from farmer to processor and butcher – has a very important role.

“The skills and attention of all those involved are vital to ensure we can provide chefs with consistently high quality beef and reduce waste.

“By using innovative techniques, such as those we have seen so expertly demonstrated today, it is possible to make the most of every single cut that comes from a carcase.

“It is important to remember that every part of a carcase, which qualifies to be sold as Scotch Beef, shares the same quality assurance. This covers the animal from birth to slaughter and the animal must also have been born, reared and slaughtered in Scotland.

“Each piece of beef is a unique and versatile product.  Today’s journey from the farm to the table shows the importance of each link in the chain. There is no substitute for knowledge and transfer of skills. It is obvious that each link in this chain care deeply about quality, best practice and above all their customers.”

QMS also launched a new Scotch Beef steak guide which pictures prime cuts of meat and details the texture, flavour and characteristics of each steak.

The guide will be distributed to every Scotch Beef Club member in the coming weeks.