Media Release: An Evening of Burlesque comes to town 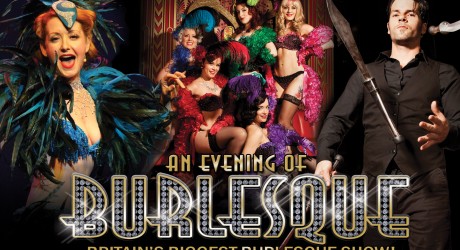 FLUSHED with success, Britain’s biggest burlesque extravaganza is coming to Inverness, direct from London’s West End and unveiling a fresh cast of burlesque all-stars for 2013.

An Evening of Burlesque’s 100-show, debut production celebrated its finale with a critically-acclaimed European tour and will visit Eden Court on Saturday 6th April at 20.00.

It’s all tease, no sleaze in An Evening of Burlesque, with sultry vocals, breathtaking choreography, corsets, killer heels and stockings aplenty.

Mischief, magic, frivolity and fun collide to give you a show you’ll never forget. Reviving the true spirit of this time-honoured art-form, this show is enhanced with a playful, modern-day tweak for good measure…

An Evening of Burlesque is for over-18s only and show’s producer, Michael Taylor, says:

“It’s the slickest, wickedly wittiest, most delightfully-choreographed cabaret spectacular of the year. Prepare for the ultimate in glamorous nights out where dance, comedy, mischief, music, magic, frivolity and fun collide – so dress up and come to the cabaret.”

Stars of An Evening of Burlesque can also include:

* The Folly Mixtures – a burlesque quartet choreographed to thrill, featuring a tasty assortment of lip-smacking themed routines that have thrilled fans throughout the UK and Europe;

* Ivy Paige – the evening’s most welcoming compere, this songstress is a cabaret star in her own right;

* Bettsie Bon Bon stars in An Evening of Burlesque. Bettsie is definitely not just a pretty face. An one-time Lloyds underwriter with a law degree, Bettsie is tease, glamour and naughtiness personified;

* Liberty Sweet – sensuous and graceful, a nimble vamp, trained at the Royal Academy of Dance, comes with her own sparkle-encrusted swing. A star of the Edinburgh Festival and ITV’s Alan Titchmarsh Show;

* AJ James – experience gravity-defying feats of balance involving knife juggling that features audience participation with a wince-inducing twist – they throw the knives; and

* Kalki Hula Girl – her explosive, show-stealing hula-hoop performances defy both the laws of gravity and impossibility, leaving audiences in an old-school vaudeville spin.

MEDIA RELEASE posted by Eden Court. You too can post media releases (aka  press releases) on allmediascotland.com. For more information, email here.