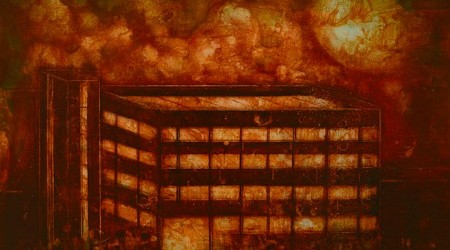 FRANK To, the Glasgow-based artist with a burgeoning international reputation as a leading contemporary figurative painter, appears to be surfing the zeitgeist with his latest exhibition.

No sooner had To opened his Dante’s Divine Comedy exhibition at The Leith Gallery, inspired by The Inferno detailing the Italian poet’s journey through hell and purgatory to heaven, than Da Vinci Code author, Dan Brown, announced that title of his next novel, to be published next month, is to be called Inferno, inspired by, you guessed it, Dante.

Frank To said: “Whilst it might seem a strange coincidence that a novel inspired by Dante’s Inferno will be published just weeks after my own exhibition inspired by the same source – particularly since I’ve been working on the show for over two years – the coincidence itself stands as testament to the enduring power and relevance of Dante’s masterpiece.

“Personally speaking, I was struck by the parallels between Dante’s 14th century epic poem and the political, social, historical and financial upheaval that modern-day Glasgow is presently experiencing, whilst Dan Brown has been quoted as saying that, while he studied the text at school, it was only recently that he came to appreciate the enduring influence of Dante’s work on the modern world.

“Yet, for me, what is genuinely astonishing about the discovery that Dan Brown has been inspired by the same source, is that Brown himself was another inspiration behind my latest exhibition.

“During the making of this work, I was inspired both by his Da Vinci Code and, more specifically, Angels & Demons, with his use of landmarks to symbolise alternative meanings.

“For example, the Glasgow Subway has 15 stops and perceptive viewers will spot that the same number of circular features appear in my latest body of work.”

To’s exhibition features such instantly recognisable Glasgow landmarks as: the NCP Car Park at Cowcaddens (portrayed as The Seventh Circle); Finnieston Crane; Provan Gas Works; the underpass at St George Subway (in a painting titled The Bowge Crossing) as well as Ibrox, which is portrayed as Limbo.

The exhibition portrays the artist himself as Dante with his most famous collector and subject, actor Sir Patrick Stewart, assuming the role of Virgil, the Roman poet who guides Dante through Hell.

Frank To’s new exhibition, Dante’s Divine Comedy, is at The Leith Gallery till 27th April with support from RBS. The exhibition comprises 33 works in total, with 25 paintings and eight fine art mono prints, ranging in price from £250 to £4500.