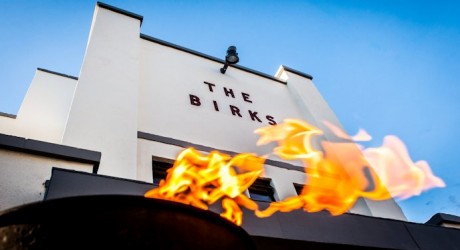 RED carpet glamour and a touch of Hollywood visited the Highland Perthshire town of Aberfeldy last night, as Golden Ticket winners from across the Highlands attended an exclusive showing of the latest blockbuster film Oblivion, starring Tom Cruise, at the opening of The Birks Cinema.

Speaking from on stage at his Broadway production of Shakespeare’s ‘Macbeth’, he called on audience members to switch off their mobile phones, and anything else that “pings”, urging local movie lovers to “Be in the moment, people” to fully enjoy the film.

Only 100 winners were lucky enough to secure a coveted place at the official opening on Friday night, out of the thousands of Golden Tickets placed around Highland Perthshire. Treated to a Hollywood style welcome, complete with the obligatory red carpet, flaming torches, searchlights and a spectacularly floodlit building, guests were served canapés and bubbly at the VIP reception before being treated to a tub of Mackie’s of Scotland Ice Cream, sponsor of the Golden Ticket promotion, to ensure their first Birks Cinema going experience was perfect.

General manager, Paul Foley, is now looking forward to what the future holds in store:

“Tonight has been a resounding success for the Aberfeldy community. The feedback we’ve received from local residents has been tremendous and we’d like to take this opportunity to thank the very many people and organisations who have played their part in helping us get here – we could not have done it without your support and for that we are truly grateful.

“I’m looking forward to opening our doors on Saturday to the general public and to welcoming people from far and wide to this magnificent venue to experience the magic of the movies once more. Tickets are on sale and are already proving popular. Once you’ve visited The Birks Cinema I have no doubt: You’ll be back.”

For more information on the film schedule and to book tickets visit www.birkscinema.co.uk