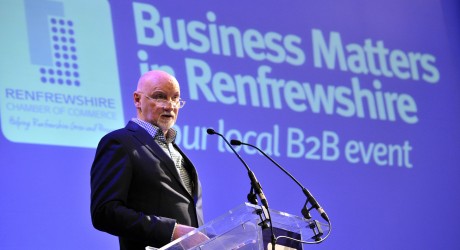 THE largest business to business event in Renfrewshire has just completed a successful two-day residence at the beautifully-restored Paisley Town Hall.

Ran by Renfrewshire Chamber, ‘Business Matters in Renfrewshire’ – a free local B2B event open to all business people, students and school pupils – was attended by more than 500 people over the two days.

The business conference on Day One attracted an impressive panel of speakers including:

Economist Dr Boettcher commented: “The focus was on the real economy, how to break the hiatus of investment and especially how to capitalise on Scotland’s numerous comparative advantages – energy, engineering and technology, education, to name a few.

“The economy may still be lacking traction, but the messages were consistently positive suggesting that a turning point in sentiment is at hand and stronger economic performance within reach.”

Sir Tom Hunter – whose first retail outlet opened in Paisley in 1984 – gave an inspirational speech and, before leaving, gave his time to a number of people keen to get some advice from one of Scotland’s most successful business men.

Sir Tom, who stayed for the whole event commented: “Well done, speakers were all good… it was a good event with an impressive turnout.”

Day Two attracted 35 exhibitors and offered delegates the opportunity to learn about a broad range of topics from the ‘How to’-themed seminars, including:

Chamber president, Tom Johnston, said: “This was our first time adding the business conference to Business Matters in Renfrewshire – and I have to say it went very well.

“Great speakers and a good turnout of approximately 200 people on day one. We listen to our members and the Chamber team used that feedback to improve the second day from last year.

“Over the course of day two, approximagely 350 attended. I would like to take this opportunity again to thank all our speakers, exhibitors and the people from Renfrewshire and beyond that attended.

“I hope what they heard and seen will inspire them to bigger and better things – improve their business and ultimately protect and ideally create jobs in Renfrewshire.”

@fissioncreative: #b2bpaisley has been a fantastic event! @RenfrewshireCoC have done an amazing job, seminars were very useful and informative!

Established in 1964 and based in Paisley at Glasgow Airport, the fully-accredited, award-winning Chamber is run by chief executive, Bob Davidson, and his team. Bob reports to a board of directors chaired by president Tom Johnston. Renfrewshire Chamber is the area’s main business member organisation – whose purpose is to ‘help Renfrewshire grow and prosper’ and have just under 600 members. The Chamber delivers a year round calendar of events and offers a range of member benefits.

MEDIA RELEASE issued by Renfrewshire Chamber of Commerce. You too can post media releases (aka press releases) on allmediascotland.com. For more information, email here.