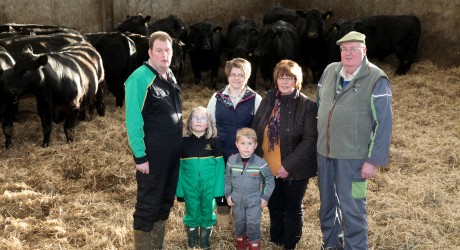 AN Orkney farming family are delighted their cattle were chosen as the source of the Scotch Beef served at the Diner des Grands Chefs, one of the most prestigious gatherings of top chefs in the world.

The Scotch Beef PGI served at the charity dinner, for which guests paid £600 per ticket, was sourced by Bridge of Allan-based Scotbeef from the Sinclair family at Unigarth in Sandwick.

The acclaimed chefs joined forces to create an exceptional culinary ‘wow’ with ‘pop-up kitchen’ cooking stations allowing them to cook live in front of guests. Each chef prepared a dish with a key ingredient sourced in the UK, of which Scotch Beef PGI was one.

The family have farmed at Unigarth for five generations and Rognvald, Barbara and their son, Steven, and wife, Leona, have gradually built the size of their Aberdeen Angus herd to 200 breeding cows.

“The fact that Scotch Beef was served at such a prestigious event is testament to the high esteem our beef, with its quality assurance and traceability, is held in at the high end of the global culinary scene,” said Margaret Stewart, marketing manager with Quality Meat Scotland.

“The Sinclair family are committed to producing a first class quality assured product and they were delighted to have been chosen to supply the beef for this prestigious event attended by so many key influential top chefs,” she added.

Caption: The Sinclair family of Unigarth Farm, Sandwick, Orkney. Pictured with children Alana and Scott are, from left, Steven Sinclair and his wife Leona and parents Barbara and Rognvald.