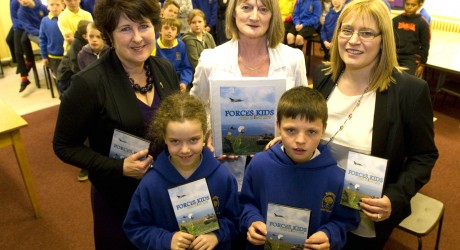 PUPILS at Raigmore Primary School in Inverness were given a rare insight into the lives of children of Armed Forces personnel yesterday with the opportunity to view a short film by the Royal Caledonian Education Trust (RCET), featuring the real life experiences and feelings of young people when a member of their family is deployed to a combat zone.

The 27-minute short film titled, ‘Forces Kids – This is My Life’, was commissioned by the RCET to raise awareness of what Armed Forces children and young people may experience during deployment and reveals the enormous encouragement they give one another during such times.

Over 30 children from eight schools across Scotland took part in the filming, sharing in their own words, their feelings about deployment and how they cope.

The film was launched in Edinburgh in November 2012 by the RCET, a charity which has supported the education of the children of current and former Scottish Armed Forces personnel for nearly 200 years.

She said: “The film highlights the need to promote discussion and understanding of the issues that Armed Forces children face, especially during potentially traumatic times like deployment. So far, over 23 primary schools in the Highland region have had a RCET supported showing of the film.

“The RCET is now working with some of those schools and their elected members on the integration of teaching resources that the Trust has developed and emotional literacy strategies for implementation in schools.”

Current head teacher of Raigmore Primary School, Fiona Shearer, said: “We have already shared the DVD with staff as well as parents and it is a very powerful and moving piece of film.

She said: “This is an excellent way in which we can help our young people, families and those close to them cope when loved ones are called to serve in combat zones and is welcome. The DVD raises awareness of the issues and anxieties involved for all those concerned and I would urge anyone to view it whether they have Forces connections or not.”

The Royal Caledonian Education Trust is an education trust supporting the children of Scots who are serving, or have served, in the Armed Forces.

Further information about the charity and a trailer of the video is available on the RCET website, www.rcet.org.uk

Issued on behalf of the Royal Caledonian Education Trust by Jen Nash, Panache Communications. For interviews and photography or for further information please call Jen on t. 07971 466 220  jen@panachecommunications.co.uk

About The Royal Caledonian Education Trust

The Royal Caledonian Education Trust (RCET) is an education trust supporting the children of current and former Scottish Armed Forces personnel. The RCET provides educational grants to help pay for school clothing, school trips, after school activities, as well as providing help with living expenses for young people in further or high education, where qualifying families have difficulty in funding these themselves. RCET runs a very successful Education Programme in Scotland working directly in support of schools, local authorities and military communities

The charity’s founding fathers were originally members of The Highland Society of London. They decided in 1808 to launch an appeal to raise money for an Asylum to house and educate the many young Scots living rough on the streets of London, having been orphaned by the Napoleonic wars. Eight years later, The Caledonian Asylum as it was then known, was established by Act of Parliament on 14 June 1815. The first Asylum was opened in December 1819 in Hatton Garden and moved to Islington in 1826. Her Majesty Queen Victoria became patron in 1852 and the Asylum was renamed the Royal Caledonian Schools. In 1902, a new purpose-built residential school opened in Bushey, Hertfordshire. After 1948, children continued to board at the school but were educated at local state schools. It is estimated that between 1819 and 1995, approximately 10,000 students spent time at the Schools. In 1995, the directors decided that the Trust’s objectives could be better met for a modern era as a grant-making body. The Royal Caledonian Education Trust continues to support the educational needs of children of Scots who are serving, or who have served, in the Armed Forces. Her Majesty The Queen is patron of the charity.