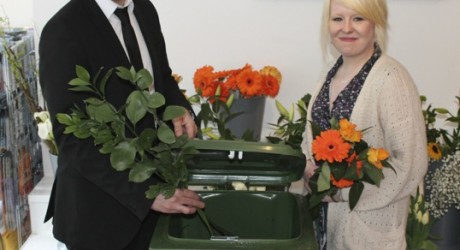 AN Aberdeen florist is the first in the North-east to begin recycling its green waste.

Blooms and Balloons, based in Chattan Place, has teamed up with Aberdeenshire firm Keenan Recycling, in a bid to go ‘green’.

All organic waste from the florist including flowers, petals, leaves, stems and thorns from the shop will now be transformed into BSI accredited compost at Keenan’s recycling facility at New Deer.

Programme manager at Keenan Recycling, Stuart Youngson, said: “Suzie has really led the way for local florists when it comes to responsible recycling.

“With landfill tax now at £72 per tonne florists are in a unique position to help the environment as well as reduce their general waste bill.”

Owner of Blooms and Balloons, Suzie Roger, has an environmentally friendly policy in place at the shop, and says it is important for other organisations to look at their environmental practices.

Ms Roger said: “I’m happy that the business is now operating in a greener way. It’s a great feeling to know that our waste is being used to help the environment and I would urge others florists to review their environmental policies.”

Organic recycling firm Keenan Recycling, has expanded its business into Inverness and the surrounding areas and recently invested £250,000 in two new lorries, increasing its fleet to five to strengthen its specialist food waste collection service and prepare for zero waste regulations.