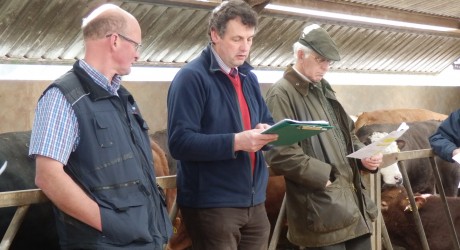 REGULAR weighing has highlighted the wide gulf in the performance of bulls in the finishing system at the Dumfries monitor farm at Hartbush, Amisfield.

Around 80 farmers who attended the most recent meeting heard that the top ten per cent of the finishing bulls averaged 1.79 kg/day liveweight gain (LWG) and the bottom ten per cent averaged 1.19 kg/day – a 0.70kg/day variation.

The top end of bulls is performing very well according to the results of the monthly weigh-ins undertaken by students from the SRUC Barony Campus. The students’ records also revealed that one exceptional Simmental bull is still growing at 1.86 kg/day and averaging 1.95 kg/day since weaning.

The group heard, however, that any steps which could be taken to improve the performance of the bottom ten per cent could clearly make a significant difference to the overall gross margin.

A close look at the 2012 gross margin per head of £235 revealed the bulls at Hartbush had performed better than the top third of QMS herds in 2011 and were well ahead of the SAC target of £156 per head.

However, the monitor farmer, John Paterson, pointed out that his feed costs are high.

“Costs are definitely up but we have been getting a better return at the abattoir and that means that margins are also up.

“The challenge is to improve next year and we have invested in two Charolais bulls with top end eye muscle, 400 day weight and good calving ease EBVs (Estimated Breeding Values). We will know better in two years’ time if this has been a good move.”

Harbro Ruminant Specialist Matt Palmer said the cattle were in excellent condition with some ready for slaughter at just over 12 months.

“The health of the rumen is fundamental to the wellbeing of the cattle and their potential to grow well and put on weight,” said Mr Palmer.

To this end, Harbro include Veo and Rumitech in both the Store and Beef Blend. Yea-Sacc and Alkacid are also used in the finishing ration to reduce stress acidosis and maintain intakes.

Including five percent straw in the diet is important to provide the “scratch’ factor, he said, which is needed to maintain a healthy functioning rumen.

Overprocessing of this fibre before feeding causes nutritional problems, he said, and a good quality ‘bypass protein’ such as wheat dark grains is also important to ensure full digestion of the ration.

Mr Palmer suggested that those cattle which were recording consistently low daily liveweight gains should be identified early and slaughtered while the high performers should be retained as long as they continue to grow efficiently.

He also suggested that it might be possible to reduce the period the bulls are on the growing ration (higher protein) to reduce the cost of the finishing regime.

It was also noted that feeding a high quality creep feed prior to weaning helped grow the calves, with feed conversion efficiency at that age likely to exceed 50 per cent.

The next monitor farm meeting, which will take place in August, will include a farm tour and focus on the sheep enterprise.

For further information please Judith Hutchison of Smiths Gore at Judith.hutchison@smithsgore.co.uk or 01387 263 066.