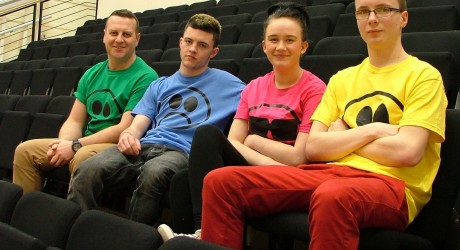 A POWERFUL play written by pupils at Paisley’s Kibble Education and Care Centre has left a lasting impression on MSPs, at Holyrood.

The play, called Please Listen was performed at the Scottish Parliament’s education and culture committee, on Tuesday, June 4 as part of their inquiry into children in care

The pupils, Jonny Wilson, Daryl Shaw, both 16, and 13 year-old Jamielee Steel, wrote the play about their lives in various care homes.

“The education and culture committee has been taking evidence for their ongoing inquiry into decision making on whether to take children into care.”

The spokesperson explains: “The play is an emotional insight into the lives of young people in care and reveals the benefits, but also the frustrations Jonny, Daryl and Jamielee felt going through the care system. The only props on stage are four chairs and a black bin bag full of clothes to represent the time Jonny was handed a bag of his belongings and was told he was going to a new home.

“The play has been performed more than 30 times to various groups and organisations since it was first seen last October.”

West Scotland MSP, Neil Bibby, a member of the education committee and Shadow Minister for Children and Young People, said:

“The play was very thought-provoking and showed the different experiences young people can have in care. It also demonstrated the need for professionals and society generally to listen to children and young people in care and take their views seriously.

“The young people from Kibble should be congratulated for sharing their experiences in this innovative play and for helping raise awareness of the issues affecting children and young people in care.”

Paisley MSP, George Adam, who is also a member of the education committee, said: “Seeing the young people perform in a play that deals specifically with life in care was hard hitting. There are no lightly dealt-with issues in the play, just the dramatisation written by people who know about life in care.

“It is easy to forget about the struggles that these young people go through, but this play shows that there is a way out, hurdles can be overcome.”

Gavin Sinclair said: “This was probably the most influential audience we have performed Please Listen to and it gave the young people a chance to get their views across to the people who make the policy decisions that will affect young people in care.”

Kibble’s chief executive, Graham Bell, said: “The pupils have achieved a lot since they wrote their play and through their many performances have grown in confidence.

“Recognising the sometimes hidden potential in young people and encouraging them like we do at Kibble, can set them on the road to taking a positive role in society as they reach adulthood.”