Media Release: Health of bought-in cattle in the spotlight at Forth monitor farm meeting 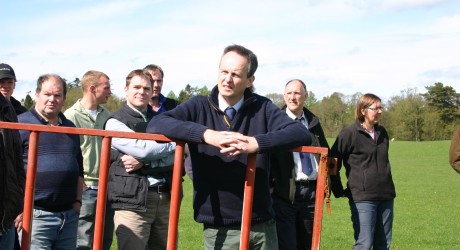 HEALTH considerations when buying in breeding cattle were among the main topics at the recent Forth monitor farm meeting, hosted by Duncan McEwen and his son, also Duncan, of Arnprior Farm, west of Stirling.

On their mixed 815 acres (330 hectares) unit, one of the network of Quality Meat Scotland (QMS) monitor farms throughout Scotland, the McEwens run a 70 head suckler herd, plus a breeding flock of 550 ewes, with the majority of progeny targeted at finishing.

The suckler herd, scheduled to start calving on 1st June, had been scanned in early January, with disappointing results.

“We were dismayed to discover that 14 of the 64 cows were not in calf,” said Duncan McEwen junior.

“This meant that we would have had a considerable shortfall of cattle to sell in 2014. So, to fill the gap, we purchased 22 mature, in-calf Aberdeen-Angus cross cows from a Perthshire farmer.”

“Cows themselves may not be a risk, but the calves inside them may be persistently infected with BVD virus. It’s therefore strongly advised to test the calves for virus as soon as possible after they’re born.

“You can tissue tag them, collecting a notch of ear tissue which can be tested or if they’re over a month old, they can be blood tested.”

The McEwens opted to tissue tag test not only the calves from the purchased cows but also, once their own cows started calving, to run the same tests on their calves as well.

“We’ve been vaccinating our cows for BVD but not testing any of the young stock to confirm their BVD status, so it seems a sensible idea to check everything while we’re at it,” said Mr McEwen junior.

The 22 purchased cows had been kept in isolation, separate from the McEwens’ own cows. Mr Gibson recommended that before the two groups are run together the new cows should be health tested.

He urged farmers to discuss what testing of bought-in cattle is required before they make their purchase.

“An increasing number of herds are now in recognised cattle health schemes, nevertheless it’s worth establishing which diseases the seller is controlling, and the herd status for those diseases. Even then, to help ensure you don’t introduce any new diseases into your herd, test any purchased breeding cattle before mixing them with your own.”

The same health advice was given regarding a recently purchased Limousin bull.

The bull had been bought privately at a Limousin sale after he had been rejected by Limousin Cattle Society pre-sale inspectors, due to different sized testicles. At the monitor farm meeting he was in “well-fed for sale” condition. He is destined to be turned in with the cows during the second week of August.

Gavin Hill, senior beef specialist with SAC Consulting, said: “Between now and bulling, you will have the opportunity to get some condition off him, which will make him fitter for his work.

“And it would also be worth semen testing him shortly before use, to establish his fertility, particularly as the reason for the difference in testicle size is unknown.”

The group also discussed the possible causes for the high number of scanned empty cows earlier in the year which prompted the McEwens decision to  purchase the in-calf cows. The cast cows were a mixture of ages and after scanning empty, had been fed through to slaughter. At the time of the meeting they were destined for sale in the near future.

The group suggested that post-slaughter, the livers of the cows be assessed for fluke damage, which may give an indication as to why they had not gone in calf.

Duncan junior voiced another consideration. “In the past, all of these cows have been synchronised prior to artificial insemination, but not for the 2012 mating. We’ve not seen any of these empty cows bulling since they were housed in October, which makes us question whether or not the synchronisation may have had some kind of lingering effect on their natural fertility.”

The next Forth monitor farm meeting will be in early August. For further information, please contact facilitator Stephen Whiteford on stephen.whiteford@sac.co.uk or telephone – 01786 450964.

For general information on monitor farm, plus detailed reports of meetings: www.qmscotland.co.uk/monitorfarms

MEDIA RELEASE posted by QMS. You too can post media releases (aka press releases) on this site. For more information, email here.