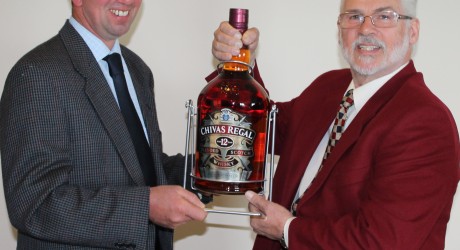 A LEADING North-east organics recycling has reached a significant milestone in the production of its agricultural compost.

The firm reached the significant figure when local farmer, Davie Smith of Inkhorn Farm, Auchnagatt, placed an order for 6,000 tonnes of compost earlier this year.

Chair of Keenan Recycling, Mel Keenan, said: “We realised that the order would take compost deliveries to local farmers past the 250,000-tonne mark since production began in 2004 at a fairly modest level, well below 1,000 tonnes per year at that time.”

Using published statistics, Keenan Recycling calculates the use of 30,000 tonnes of compost annually by their agricultural customers can result in a collective saving of nearly £500,000 in bagged fertiliser and liming costs every year, as well as maintaining and improving the fertility of the land they farm.

There is also a huge saving to Aberdeen City, Aberdeenshire, and Moray Council in the diversion of organic waste away from landfill.

Keenan Recycling processes around 50,000 tonnes of organic waste every year saving customers nearly £4million in landfill tax, which results in a net saving of around £2.5million per annum when composting costs are taken into account.

The composting operation also provides environmental benefits as organic material tipped in landfill sites gives rise to large quantities of methane, one of the worst greenhouse gases, unlike the composting process which does not produce the gas.

Keenan Recycling decided to mark the occasion by presenting Mr Smith, who is a regular customer, with a very special bottle of whisky, a gallon of Chivas Regal from Strathisla Distillery.

Mr Smith said: “I use Keenan Recycling’s premium grade compost and have seen a marked improvement in the fertility of my land together with improved yields and a reduction in bagged fertiliser costs.

“Interestingly, I have also noticed that it produces stronger crops and therefore tends to eliminate competing weeds such as sterile brome in winter barley.”

Organic recycling firm, Keenan Recycling, recently increased its business into Inverness and the surrounding areas and currently processes in excess of 50,000 tonnes of waste per year at the award-winning £5million facility, collecting food waste from more than 500 businesses across the region.