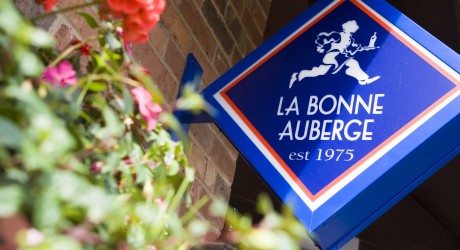 THE hopes of Glasgow’s fiercely-proud hospitality scene are resting firmly on one restaurant’s shoulders, as it is announced that La Bonne Auberge is in the running to claim the hotly-contested title of Glasgow’s Favourite Business.

Says a spokesperson: “Following nominations from the public, La Bonne Auberge, which was originally opened in Glasgow in 1975 by hospitality legend, Maurice Taylor, is one of six businesses to make the finals of the awards, organised by Glasgow Chamber of Commerce.

“The news comes hot on the heels of La Bonne Auberge’s recent recognition by TripAdvisor when it gained a Certificate of Excellence award, as one of the top-performing ten per cent of businesses listed on the world’s largest travel site.”

Now well into its fourth decade, La Bonne Auberge is clearly still acknowledged as one of the city’s most popular haunts and Maurice Taylor, who continues to own and manage the multi, award-winning restaurant comments: “My family, friends and staff all know that La Bonne Auberge is my baby, so I have been especially proud to see it win a clutch of national and international awards in recent times.

“However, to win Glasgow’s Favourite Business would be the icing on the cake for me.

“Glasgow is the city in which I was born and where I first opened La Bonne Auberge and to win would be fantastic recognition for the staff who have worked hard over the years. However, the fact that this award is voted for by the people of Glasgow, would make it extra special to me.”

The Glasgow Business Awards 2013 take place on Thursday 3 October 2013 at the Thistle Glasgow Hotel, where the winners will be announced.