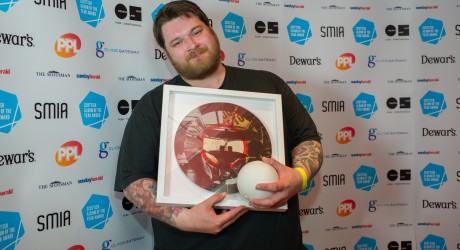 THE Scottish Music Industry Association [SMIA] is delighted to announce the winning album of this year’s Scottish Album of the Year Award [The SAY Award].

At a glittering award ceremony tonight in Glasgow’s Barrowland Ballroom, Thirteen Lost & Found by RM Hubbert picked up a £20,000 cash prize along with an exclusive piece of artwork made by two emerging artists, Emma Reid (Glasgow School of Art) and Gregor Morrison (Edinburgh College of Art), the joint winners of The SAY Award’s sister prize, The SAY Arts commission. Both prizes reflect and acknowledge the strong bond between music and the visual arts.

The nine other shortlisted artists collected a prize of £1,000 plus a piece of artwork.

RM Hubbert (Hubby) said: “I am shocked and delighted at winning. I never expected it. It is testament to all my collaborators that we won.”

Stewart Henderson, chair of SMIA, said: “Congratulations to Hubby on behalf of everyone at The SAY Award and the SMIA. We’ve got another worthy winner and an exceptional album to have emerged from such a strong field.”

On behalf of panel of judges, John Williamson, said: “I have been involved on a number of these types of discussions before and I don’t think any of them have been as passionate or divisive as this one. All of the albums had supporters amongst the judges and the final decision was extremely close. Among the things that impressed across the range of albums were the range of emotions and quality of songwriting. All of these are records made in a modern way without big budgets or big productions and all involved degrees of collaboration and community with other musicians from Scotland and beyond. In the view of the judges, RM Hubbert’s album was the one that encapsulated and engaged the most.”

Caroline Parkinson, director of Creative Development at Creative Scotland, congratulated the winner: “Congratulations to RM Hubbert, winner of the 2013 Scottish Album of the Year. The awards are a fantastic celebration of Scotland’s contemporary musical talent – and also provide a platform for Scotland’s emerging visual artists.”

“It has been a fantastic night that has recognised and celebrated Scotland’s diverse and thriving music scene,” said Jonathan Morrish, director of Corporate Communications, PPL.

“The SAY Awards help illustrate both the breadth and wealth of musical talent in Scotland that contribute so much to the country’s culture and PPL is proud to be associated with such a quality event. It is the first year that we have been associated with the awards and on behalf of our Scottish members we look forward to continuing our support as we look to raise our awareness around the country. “

He added: “Today’s music industry is constantly evolving and as a result today’s recording musicians are having to become increasingly innovative and self-dependent. PPL is proud to support rightholders and performers by providing them with the royalties from the use of their music and helping them continue to fulfil their passion and making music Scotland should be proud of.”

Suzy Clark, brand manager, Dewar’s, said: “Congratulations to RM Hubbert. It’s the type of album that can only be created by folk who love and live music. We at Dewar’s are proud to be a part of it.”

Ian Manson, chief executive, Clyde Gateway: “Congratulations to RM Hubbert. The award is a fitting tribute to Scotland’s eclectic music scene. And what better place for the ceremony to take place than in Glasgow’s premier music venue, the Barrowland Ballroom in the heart of Glasgow’s East End.”

For further information, interviews and photographs:

Paisley born RM Hubbert (or Hubby to his friends) has been a much-loved and respected fixture within the Glasgow music scene for years, from his earlier John-Peel endorsed work with El Hombre Trajeado through to his recent, critically-acclaimed solo projects. A hugely-gifted and expressive guitarist, Hubby’s work incorporates elements of flamenco, folk, samba and taiko, often packing a formidable emotional punch in the process.

Conceived by Hubbert as a way to reacquaint himself with old friends while making some new ones, ‘Thirteen Lost & Found’ was produced by long-time friend Alex Kapranos (Franz Ferdinand) and features collaborations with, amongst others, Emma Pollock, Luke Sutherland (Long Fin Killie, Mogwai) and Aidan Moffat. With evocative solo pieces nestled alongside spontaneous and experimental collaborations, the resulting collection is eclectic and beautiful, featuring voice, percussion, violin, piano, accordion, vibraphone, gu zheng and, above all, Hubbert’s extraordinary guitar playing.