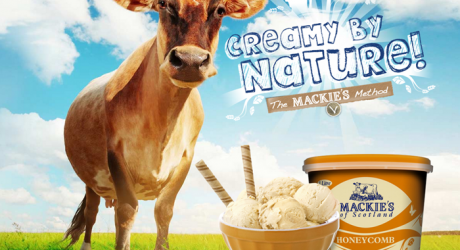 Running across July and August, the activity was planned and bought by Republic of Media and will run on STV, Channel 4 Scotland and Five Scotland with a 30-second commercial created by Plum Films in Edinburgh.

Pre-roll advertising on YouTube will extend the TV campaign into online video.

The campaign will reinforce this Scots-made ice cream’s premium, natural values and encourage Scottish consumers to add it to their trollies this summer. Focusing on the ‘Simply Creamy’ taste of Mackie’s ice cream, the ad asks, ‘What are you getting?’ – encouraging consumers to think of the journey their taste buds will go on when they taste it.

See the ad at http://bit.ly/mackiessimplycreamy

The campaign will launch with a spot in the half time break in Coronation Street on STV on Friday July 5 (19.45), spots on launch night also include Eddie Stobart: Trucks and Trailers on FIVE (2045) and  The Million Pound Drop Live on Channel 4 (2215).

TV activity will be supported by social media and Mackie’s new website.

Karin Hayhow, marketing director at Mackie’s of Scotland, said: “We’re looking forward to being on TV across Scotland this summer with a view to raising brand awareness among younger consumers.

“Our advert is about enjoying Mackie’s ice cream and we hope to engage our consumers in the fun advert content as well as with supporting activity online. We feel confident that Republic of Media have helped provide the necessary guidance to maximise the impact to our selected audience within the budget provided.”

About Mackie’s of Scotland

We began making ice cream on our farm in Aberdeenshire in 1986. Now, 70 staff and 500 cows work in a ‘sky to scoop’ design chain. Our wind turbines generate power, we grow crops to feed the cows to produce the fresh milk and cream we need to make ice cream. Mackie’s is already established as the no.1 take home premium ice cream in Scotland.

About Republic of Media

MEDIA RELEASE posted by Republic of Media. You too can post media releases (aka press releases) on allmediascotland.com. For more information, email here.