Media Release: Still Game back… on stage at Ayr Gaiety 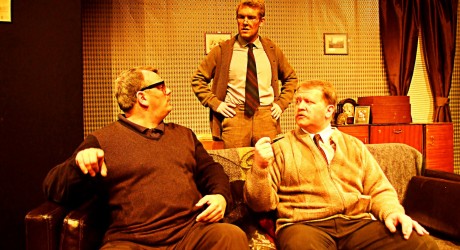 SCOTLAND’S best-loved ‘old geezers’ are back.

The Gaiety Theatre, Ayr will host the first performances in 2013 of Still Game – the stage version of Ford Kiernan and Greg Hemphill’s iconic Glasgow sit-com – on Friday and Saturday, July 26 and 27.

Featuring an all-new cast, TV’s favourite pensioners Jack, Victor and Winston return with their hilarious and poignant tussles with love, life and how many bars to put on the fire.

First brought to life more than a decade ago, the Still Game characters have become some of Scotland’s television favourites, as they battle neds, broken lifts and the price of a packet of digestives.

The Gaiety stage play is produced by the Sonic Boom Theatre Company and directed by Clare Sheppard and Kenny Boyle while the honour of playing Jack, Victor and Winston falls to John Love, Christopher McKiddie and Gary Miller.

John Love, aka Jack Jarvis, says: “These characters are so important to so many, and it’s just an incredible experience – as an actor and a fan – to be involved. Hamlet-Shmamlet – actors everywhere would kill to give their Jack!”

Gary Miller, who plays Winston, added: “Still Game is a fabulous piece of Scottish contemporary theatre, a very funny script and I honestly don’t think the writers knew what a gem they had created back then.

“The play and the characters are very dear to my heart and the respect I have for them will ensure I constantly stretch myself to do everything justice. Come and enjoy!”

Christopher McKiddie admits that playing Victor is an exhilarating but terrifying experience. Christopher said: “He is such a memorable character, beloved by so many, not least myself. Hopefully I can do the script, the character, and the play justice.”

With kind agreement of the writers, 20 per cent of all profits from the show will be donated to Age Concern Scotland.

Caption: Jack, Victor and Winston are back… on stage at the Gaiety.

MEDIA RELEASE posted by Alistair Nicol PR. You too can post media releases (aka press releases) on allmediascotland.com. For more information, email here.