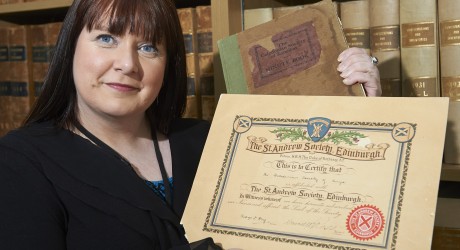 HISTORICAL records from expatriate societies in Africa have been donated to the Highland Archive Centre thanks to a University of the Highlands and Islands history student.

The documents, which date back to 1907, include books of minutes, correspondence and event programmes from the Caledonian Societies of Kenya and Zanzibar.

The archives were donated by Robert Lewis-Lettington, a legal consultant in Nairobi who is writing his final dissertation towards completing the university’s online postgraduate Master’s degree in the history of the Highlands and Islands.

The societies’ records shed light on the experience of expatriate Scots living in East Africa. Many Scots travelled to the area in the mid-19th century to explore, fight the slave trade and evangelise and ended up founding the Imperial British East Africa Company in 1888.

More Scots arrived as administrators, engineers, soldiers and missionaries after the East Africa Protectorate was established in 1895 and Caledonian societies appeared throughout the region.

The donated archives illustrate various aspects of the life in the Scots community.

A Highland Games booklet includes rules for the preparation of cabers and stones, while the minutes refer to numerous issues, from arrangements for an early St Andrews Day dinner on the beach of Prison Island in Zanzibar, to the theft of topsoil from the Kenyan Society’s playing fields in Nairobi.

Originally from Edinburgh, Mr Lewis-Lettington has been living in Kenya since 1997. He moved there for an educational exchange, but now works for the United Nations. He became involved in the Caledonian Society through events such as its annual Burns Supper and took on the role of custodian of its records as a long serving member of the group’s committee.

Mr Lewis-Lettington stored the historical documents in a trunk in his study, but wondered if there was a better location for them.

He explained: “They were not in regular use and I was concerned about their conservation and accessibility. I felt the National Archives in Kenya wouldn’t be the best place for them as it has challenges with resources and the general public there have a relatively low level of interest in the Scots community.

“I told Dr David Worthington from the University of the Highlands and Islands Centre for History about the records and he suggested I contact the Highland Archive Centre. The Centre was happy to give them a home and the Society was pleased to donate them as long as they would be maintained and made available for research.”

Mr Lewis-Lettington deposited the records to the Archive Centre in Inverness on a trip to Scotland in August 2012. They have now been catalogued and can be viewed in the Centre’s public search room.

Dr David Worthington, head of the University of the Highlands and Islands Centre for History, hopes the documents will be of use to researchers.

He said: “I’m delighted that one of our students has helped to bring these records to Inverness. The materials should be of interest to people researching diaspora communities, particularly the role of Scots in 19th and 20th century East Africa.

“A number of prominent Highlanders were involved in the area at this time so the records should be an excellent resource for Highland Archive Centre and for University of the Highlands and Islands students.”

Fiona Macleod, senior archivist for High Life Highland, said: “Highland Archives is delighted to have worked in partnership with the university’s Centre for History to ensure the long-term preservation of this interesting collection.

“The records provide a fascinating insight into the lives of Scots living in Kenya and Zanzibar from the early 20th century onwards and the collection is available to consult in the search room at the Highland Archive Centre.”

You can find out more about the University of the Highlands and Islands and its history courses at www.uhi.ac.uk

Photo: Fiona Macleod with some of the records. Please credit Ewen Weatherspoon

Its purpose is to have a transformational impact on the development and prospects for the region, its people and its communities.