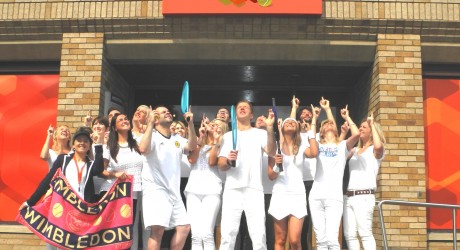 RADIO station, 102.5 Clyde 1, has served up its own tribute to Scotland’s Wimbledon champion – rebranding itself as ‘102.5 Murray Won’.

Following the Dunblane star’s sensational victory over top seed Novak Djokovic, 102.5 Clyde 1 has made its very own Grand Slam salute to Britain’s first male singles champion at SW19 in 77 years.

From 6am until 7pm today (Monday) the station will replace all mentions of Clyde with the new name of ‘102.5 Murray Won’ during presenter chat, news, sport, traffic and travel throughout the day.

The tribute day was kicked off by George Bowie at 6am and follows a fortnight of Murray support from the station – with staff and listeners encouraged to donate money to Cash for Kids last Friday in exchange for wearing Wimbledon whites to work.

Bowie, dressed in whites for the day of celebrations, said: “Everyone at 102.5 Murray Won is incredibly proud of awesome Andy and that we now have our very own Wimbledon champion. We are all in complete awe of our local hero.

“So we felt it was only right we created our own tribute for Andy and all day today we will be going absolutely Lendl, sorry, mental for Murray. His victory only goes to show that strawberries and cream always rise to the top.”

The entire station has been handed over for the tribute day with other features of 102.5 Murray Won including dedicated logos, jingles and social media activity.

102.5 Murray Won is the centre court of radio in Glasgow and the west of Scotland, featuring ace presenters and a mix of ‘more of the songs you 15-love’.

We welcome straight sets of great guests and personalities and serve up to the minute local news, sport, traffic and travel and entertainment information. Big on listener interaction, we always welcome new calls please.

102.5 Murray Won is the Number 1 radio station in Glasgow and West Central Scotland.