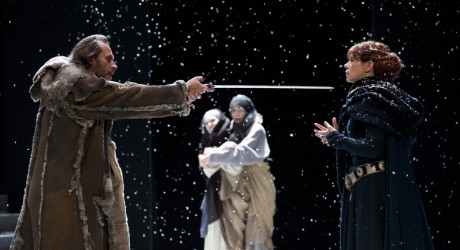 NATIONAL THEATRE OF SCOTLAND AND THE ROYAL SHAKESPEARE COMPANY’S  PRODUCTION OF DUNSINANE RETURNS IN 2013.

Touring Scotland and the UK 2013

Dunsinane, David Greig’s majestic sequel to Shakespeare’s Macbeth has proved a major hit with audiences in England and Scotland since it was first premiered by the RSC at Hampstead Theatre in 2010. The production received its Scottish premiere in 2011, at the Royal Lyceum Theatre, Edinburgh.

Siobhan Redmond and Jonny Phillips will reprise their roles as Gruach and Siward. respectively.

The National Theatre of Scotland and the Royal Shakespeare Company are delighted to remount this production and to tour it to the main stages of theatres across Scotland and the UK in 2013.

Dunsinane is the setting for Greig’s play, the Scottish garrison town where the English occupying army is ready to commence battle and historically believed to be the site of a battle where Malcolm defeated Macbeth in 1054.

Greig has taken Scotland’s real landscape and history and dramatically mixed it with the setting of Shakespeare’s play, one of the most famous landscapes in literature, even though Shakespeare himself never set foot on Scottish soil.

Macbeth is dead. Under cover of night, the English army has swept through the landscape, killed the tyrant and taken the seat of power.

Attempting to restore peace and put in place a new ruler, the commanding officer is beset by a brutal guerrilla uprising and simmering discontent amongst his own inexperienced troops.

Struggling to grasp the alien customs and politics of this harsh country, he finds himself drawn towards the tyrant’s powerful widow in search of someone to share his burden of responsibility.

Increasingly isolated from his own men and Scottish allies alike, his efforts to restore order appear futile as the situation spirals out of control.

“A work of compelling intelligence, provocation and wit.” The Guardian ****

“Instead of being an intriguing exercise in reimagining history, the play becomes the frankly thrilling spectacle of one of the country’s leading writers using its biggest stage as the great public forum of debate…If it’s riveting spectacle, challenging ideas and human drama you want, this is the show to see.” The Times  * * * *

David is a playwright, screenwriter and director.

His work for the National Theatre of Scotland includes The Strange Undoing of Prudencia Hart, One Day in Spring, Glasgow Girls, Peter Pan, The Bacchae, Futurology: A Global Review and Gobbo. His production of Charlie and the Chocolate Factory opened in the West End earlier this year and his new play The Events premieres at the Traverse Theatre, Edinburgh in August 2013.  Other theatre highlights include The Monster In The Hall, Midsummer, Yellow Moon, Being Norwegian, Damascus, Pyrenees, San Diego, The American Pilot, Outlying Islands and The Cosmonaut’s Last Message to the Woman He Once Loved in the Former Soviet Union.

His previous work for the National Theatre of Scotland includes Dunsinane and for the Royal Shakespeare Company Shakespeare in a Suitcase. Other theatre work includes The Miser (Watermill, Newbury), Chavs (Lyric, Hammersmith), Sunday is the New Saturday (Edinburgh Festival Fringe), The Art of Success, New England,The Permanent Way and The Cherry Orchard (LAMDA). Television work includes At Home with the Georgians and Hustle.

After Dark Wed 25 Sept – post-show discussion with cast and creatives.