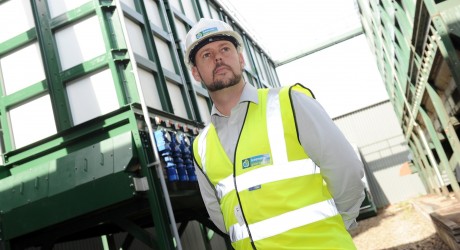 A LEADING North-east organic recycling company has reached a significant key milestone on the third anniversary of its award-winning food collection service.

Keenan Recycling, based at New Deer, Aberdeenshire, officially launched the commercial food waste collection scheme on 28 July 2010, and has collected and recycled 20,000 tonnes of food waste, which equates to the same weight as 83 Boeing 747 aeroplanes, from businesses in the North-east since its inception.

Today, 650 customers from a range of businesses including large oil companies, hotels, restaurants and food processors use the service to recycle items such as leftover food, coffee grounds, cups and paper towels, significantly boosting their recycling rates.

The waste is then used to create British Standard Industry accredited compost for farming and horticultural use.

Managing director, Grant Keenan, said the service has become increasingly popular since it was launched three years ago, as more companies are choosing to recycle in the workplace to comply with the new zero waste regulations, which will require all businesses producing more than 50kg of food waste per week to separate this from landfill waste by the end of this year.

Mr Keenan said: “By 1 January 2014, any businesses producing more than 50kg of food waste per week will need to recycle it, so it is important for companies to put plans in place to prepare for the new legislation.

“The composting operation also provides environmental benefits as organic material tipped in landfill sites gives rise to large quantities of methane, one of the worst greenhouse gases, unlike the composting process which does not produce the gas.”

Organic recycling firm, Keenan Recycling, has expanded its business into Inverness and the surrounding areas and invested £250,000 in two new lorries, increasing its fleet to five to strengthen its specialist food waste collection service and prepare for zero waste regulations.