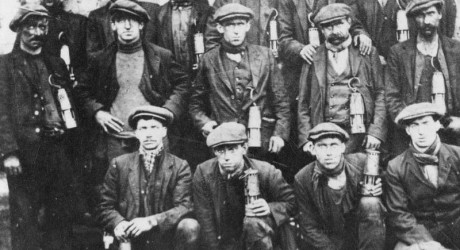 National Theatre of Scotland in association with ON at Fife presents

Adapted, designed and directed by Graham McLaren,
based on the 1926 play by Joe Corrie

At Pathhead Hall, Kirkcaldy from 2nd to 12th October 2013,
with a press performance on 3rd October at 7.30pm

INTENSELY physical and loud, driven by explosive choreography and a live four-piece band, the National Theatre of Scotland’s In Time o’ Strife is a powerful re-imagining of Joe Corrie’s rarely performed classic play, exposing the lives of a Fife mining family staring hunger and defeat in the face during the General Strike of 1926.

Produced in association with ON at Fife, In Time o’ Strife is playing at Pathhead Hall, Kirkcaldy in October 2013 and tickets are now on sale from ON at Fife box office.

In addition to Corrie’s original script, the show will interweave fragments of his other plays, poems and songs. Director Graham McLaren, whose productions for National Theatre of Scotland include Men Should Weep and A Christmas Carol, has adapted this classic of the Scottish canon with a contemporary audience in mind.

Corrie was a miner from the Fife coalfields and wrote the play while on strike in 1926, to raise funds for the soup kitchens feeding his fellow miners and their starving families.

When the play was first performed by Corrie’s hastily assembled local amateur group, the Fife Miner Players, it was an outstanding success, touring to theatres all over Scotland and England, playing to audiences of between 800 and 1,000 per night and going on to win international acclaim.

Over the years, Corrie has been described as “the greatest Scottish poet since Burns”, by T.S. Eliot, with his works having being compared variously to Emile Zola, Sean O’Casey and Federico Garcia Lorca in their respective local traditions.

Despite this, In Time o’ Strife and Corrie himself were shunned by the Scottish theatre elite of the day and the play has seldom been performed professionally; 7:84’s was the last production, at the Citizens Theatre, Glasgow in 1982.

“In Time o’ Strife was way ahead of its time. It’s a great shame that Corrie was never encouraged, never accepted by the mainstream – much like Ena Lamont Stewart [Men Should Weep].

“Because here was a great playwright with an original voice, writing about things that no one had any idea about.

“The play depicts the brutal social consequences of poverty, but it’s also a love story – one with a cruel dilemma at its heart – and we’ll also be drawing on Corrie’s less well-known poetry and songs. People will see Joe Corrie in a whole new light.”

“I am delighted that ON at Fife is continuing its relationship with National Theatre of Scotland and bringing ‘home’ to Fife this updated interpretation our Joe Corrie’s masterpiece In Time O’ Strife.

“We are proud to play our part in staging this important Scottish work and look forward to welcoming audiences to Pathhead Hall for what I hope will be a sell-out run of the show.”

An age guide of 12 + is suggested for this production.

Graham is a Glasgow-based theatre artist who has been making theatre for almost two decades. In that time he has created work ranging from totally improvised and devised work to classical texts. He has made shows in London’s West End, ancient Greek amphitheatres, National Theatres and festivals across the world.

In 1994, he established the internationally acclaimed Theatre Babel, where he remained artistic director until 2008. In 2005, Graham was invited to join Perth Theatre, Scotland, as artistic and co-creative director; he remained with Perth Theatre until January 2008. The following year he began creating work for the Toronto based theatre company Necessary Angel as associate artist.

Graham is currently an associate director of the National Theatre of Scotland, where his previously shows include A Doll’s House, A Christmas Carol and Men Should Weep.

Vicki’s previous work for the National Theatre of Scotland includes Beautiful Burnout (with Frantic Assembly), Knives in Hens, Home: Inverness and, as associate movement director, Black Watch. Other recent highlights include Dr Dee (ENO / MIF), Two Gentlemen of Verona (Royal & Derngate, Northampton) and One Up One Down (Barrowland Ballet). As movement director, Vicki’s credits include The Drowning Pond (YMT) and The Silence of the Sea (Donmar) and, as movement associate, The Curious Incident of the Dog in the Night Time (National Theatre, West End).

Anita’s previous work with the National Theatre of Scotland includes The Wolves in the Walls, The Elgin Macbeth and Men Should Weep. Other theatre credits include Fleeto and Wee Andy (Tumult in the Clouds). Film and TV work includes Fields of Blood, River City, Waterloo Road and The Bill.

Owen has worked previously with the National Theatre of Scotland on Knives in Hens, Peter Pan, Our Teacher’s a Troll, Cockroach, 365 and Rupture. Other recent theatre highlights include The Life of Stuff (Theatre 503), Wonderland (Vanishing Point), King Lear (Citizens, Glasgow) and Romeo and Juliet (Òran Mór, Glasgow). Film credits include Dying Light, Score, 7/11 in Repeat and What Would Ridley Do?.