Media Release: Anyone for tennis? Judy p-p-p-pops by to meet the p-p-p-penguins 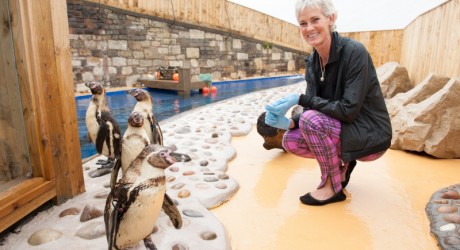 Judy – who was in St Andrews for RICOH Women’s British Open Golf, announced her impromptu intention to visit the Aquarium on Twitter saying:

“Coming to visit my doppelganger on Thursday morning… Hoping to p-p-p-pick one up!”

Judy the penguin was one the names selected by Aquarium fan Elspeth Badger from Perthshire in a nationwide competition held to name all four penguins. The waddle was formally named just a couple of weeks ago in honour of Andy Murray following his triumphant win at Wimbledon in July, and the women in his life: girlfriend Kim, grandmother Shirley and mum Judy.

Judy tweeted in response to the announcement saying that she loved the new names of the waddle and that the Murray family are known for doing their very own penguin impressions.

“We are thrilled that Judy came along to the Aquarium today to visit our penguins and to meet the feathery Judy face to, er, beak. We loved that we were able to celebrate Andy Murray’s Wimbledon win with Elspeth’s suggestion of naming them Andy, Kim, Judy and Shirley – everyone thinks it really suits them!”