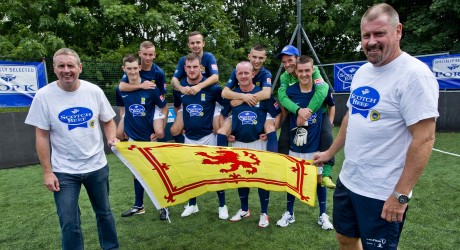 SCOTLAND’S ‘Homeless World Cup’ team put the final touches to their preparations for a record third win, this time in in Poland, having claimed the title of ‘World Champions’ in Denmark in 2007 and France in 2011.

The team, which is managed, selected and coached by social enterprise, Street Soccer Scotland, heads to Poznan tomorrow (Thursday 8th August) to compete in the international tournament which has attracted forty eight countries from around the world.

Scotch Beef branding will take pride of place on the front of the team shirts, thanks to the support of Quality Meat Scotland, which has extended its on-going support of Street Soccer Scotland.

Ally Dawson, team manager and ex-Rangers and Scotland player, said: “Scotland teams have always performed well in past Homeless World cup tournaments and we’re hoping that will continue this year too.

“We’ve won it twice in the last six years and the players are absolutely determined to try and become the first nation to win it for the third time.

“The players have trained hard and there is a great spirit which always comes with our squads.

“I know every one of them is proud to be selected and to pull on the blue shirt.

“There’s also a nice memory for me from the trip to Poznan. It was the place I made my debut for Scotland, unfortunately in a 1-0 defeat!”

Carol McLaren from Quality Meat Scotland said: “As part of our support of Street Soccer Scotland’s Challenge Series this year we’ve been encouraging players to recognise the importance of a healthy diet to their performance on the field and we’re delighted to be extending our support to the Homeless World Cup.

“We’re proud to be backing the team in their quest to win the tournament again.”

David Duke, chief executive of Street Soccer Scotland, said: “Football has a very positive impact on the lives of the people we work with every day.

“We now work with over 5,000 socially-disadvantaged adults and young people every year helping their physical and mental health, their employment prospects and breaking down barriers that social exclusion brings to their lives.

“I played in the Homeless World Cup myself back in 2004 and I know from personal experience that whatever the outcome in Poland is, the positive impact that the whole team will feel on their lives will be tremendous and I wish them all well.”

The Street Soccer Challenge Series is the biggest event series ever run by Street Soccer Scotland that unites teams and players from across Scotland through regular five-a-side tournaments and access to information on health, personal development and employment and training.

Quality Meat Scotland is the public body responsible for helping the Scottish red meat sector improve its efficiency and profitability, and maximise its contribution to Scotland’s economy.

Street Soccer (Scotland) is an award-winning social enterprise which uses the power football to promote positive change in the lives of socially-disadvantaged adults and young people across Scotland.