Media Release: Team playing on and off the field 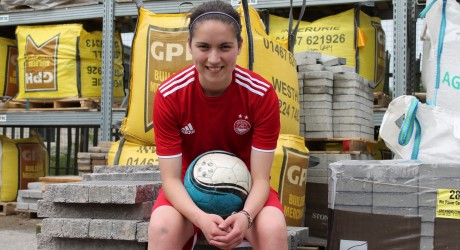 FOOTBALL may have the perception of being predominately enjoyed by the male population but this is not the case for a female member of staff at an award–winning builders merchants.

GPH Builders Merchants sales advisor, Esther Gordon, 21, enjoys the sport so much that she has played for a division of Aberdeen’s top ladies team for ten years.

The centre-half player for Aberdeen Football Club (AFC) Ladies Reserves, has always had a passion for the sport since she was a young girl and has played for as long as she can remember.

Starting her football career playing for Hazlehead before being scouted to play for AFC, Esther has played through the different age divisions for the top city team to get to where she is today.

However, Esther is not just scoring on the playing field but also in her line of work at the North-east builders merchants, where she works as a sales advisor at the Westhill branch.

Esther started work with the company on a part-time basis in May 2010, and now works full-time for the merchants.

Over the years, she has been put through industry and customer service training, which she has excelled in.

Esther was the first female to be awarded with the Deacon Taylor Award for showing her excellence whilst studying for her SVQ diploma in customer service.

The award is presented to the top student undertaking a course with the Builders Merchants Federation (BMF) through national training providers, Didac.

Esther said: “I love playing football as it keeps my fitness levels up as we train twice a week and have a game every Sunday.

“I love the competitiveness of the game and the hype that goes with it.

“I really enjoy playing for the reserves team as it gives me a bigger incentive and drive to succeed and work with the team to get to the first division.

“There are so many skills I apply to my daily work from my football, the biggest being team work, we are a close-knit team at GPH and I’m always eager to help customers and colleagues in need.”

GPH Builders Merchants, which has premises in Inverurie and Westhill has been operating in the North-east for more than 30 years and offers an extensive range of products including landscaping, timber and joinery, roofing, civils, clothing and safety wear, power tools, plumbing and plant and tool hire.