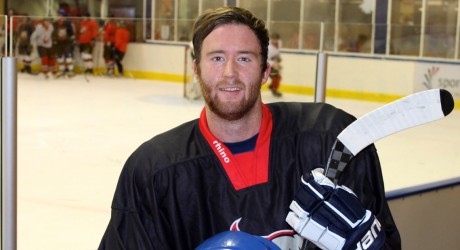 ABERDEEN’S premier ice hockey team is hoping it’s hometown glory, as they welcome an ex-professional ice hockey player back to the Granite City.

The Aberdeen Lynx ice hockey team, which competes in the Scottish National League, has signed Jonathan Hogan, 24, originally from Aberdeen, for the upcoming season, after two years away from the club at rival teams in Dundee.

Mr Hogan, who started playing hockey at the age of ten, played with the Aberdeen Lynx during his junior years up to the under 19s, but was forced to move clubs when the ice rink closed in 2008.

The centre and winger, spent four years in Dundee, initially signing with the senior team at the Dundee Comets, before getting the opportunity to sign for professional side, The Dundee Stars last year.

The Aberdeen-based team is currently preparing for its first home game against Jonathan’s old club, the Dundee Comets on Saturday 7 September.

This is also will be the first game under new head coach, Rod Ramsay, formally of Dundee Tigers.

Mr Hogan said: “Coming home to Aberdeen to play for the Lynx is exciting for me as I really want to fall in love with hockey again.

“When I spoke to the new coach and some of my friends on the team, who I have known since I was ten, I knew that I could do this with the Lynx.

“I am hoping to use my experience from my time at Dundee to help the team develop and grow so we can make it to the top of the leader board.

“I am looking forward to the first home game as the team have a fantastic fan base and, as we are up against my old team, it is sure to be an action-packed game.”

The Lynx, which plays in front of thousands of fans at the Aberdeen Linx Ice Arena on the Beach Promenade, had a good start to the season last year but with several injuries, the team only managed to finish seventh in the league.

With Rod and Jonathan on board, the team are aiming to reach the top three in the leader board.

Newly appointed Lynx head coach, Rod Ramsay, said: “It is has been great to get Jonathan back on board with the Lynx, as he has a great deal of experience in the sport and he learnt a lot from his time in Dundee.

“As he is from Aberdeen, he stayed in contact with many of the boys and already has strong friendships in the team, which has allowed him to fit in well and quickly with the Lynx.

“We are currently undergoing some tough training sessions to ensure the team are ready for the season and Jonathan has already shown a great level of commitment to the team.

“We are all excited for the first home game and plan to put on a great show for the fans.”

The Aberdeen Lynx will face off against the Dundee Comets in the first home game on Saturday 7 September at the Aberdeen Linx Ice Arena. Tickets are priced at £6 for adults, £4 for kids.

The Aberdeen Lynx also has junior and senior teams and encourage new players of all ages to get in touch if they are keen to start a new sport.

For more information about the Aberdeen Lynx and the fixtures, visit the website www.aberdeenlynx.com and Facebook page www.facebook.com/AberdeenLynx.

Issued by Frasermedia Ltd on behalf of The Aberdeen Lynx