Media Release: FilmG 2014 launched as youngsters encouraged to ‘go it alone’ and make their own films 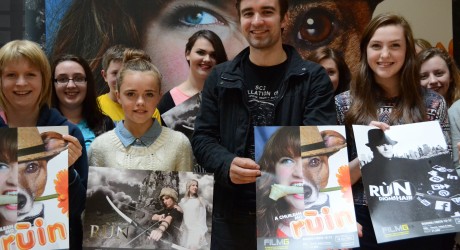 Columba 1400 in Staffin hosted the event where this year’s competition theme was also revealed by Dòl Eòin MacKinnon of band Macanta (from Harris and living in Glasgow) who scooped three top awards in FilmG 2013 for his music video.

The theme ‘Rùn’ – Love, Secret or Intent – has been chosen to inspire new ideas for film-makers, community groups and young people wishing to take part in the 2014 contest.

Since its launch in 2008, FilmG has encouraged both young people and adults to pick up their cameras and explore their creative talents in conjunction with the use of the Gaelic language.

FilmG entrants are asked to make a three to five minute short film in the language but both non-Gaelic speakers and learners are particularly encouraged to get involved, with language help available through the FilmG support programme, TàlantG.

This year young people are being encouraged to ‘go it alone’ and make their own films out-with the FilmG schools programme.

Among the teenagers in attendance was Molly Robertson from Broadford on the Isle of Skye who entered her own film into last year’s competition and won £1,000 towards new equipment when she picked up the prize for Best Production in the 12-17 category.

Molly said: “Everything about FilmG was so exciting last year, especially being able to attend the awards ceremony. It’s great to have a project like FilmG to work towards!”

Floraidh Forrest, FilmG project manager, said: “We really want to encourage more youngsters like Molly to make films on their own or in groups with their friends.

“Recording and editing equipment is easy to come by and young people are very computer and technically literate these days, all they really need is a good idea to make a film, the rest is easy!”

Annette Kerr, project supervisor for MG ALBA, said: “FilmG has been a resounding success since its launch in 2008 and we are certain that the sixth annual competition will once again unearth new talent that can produce exciting short-films in Gaelic.

“Year-on-year, the quality of entries to FilmG has impressed our judging panel and the expectations we had about the creation of new Gaelic media content when we launched the competition have been well and truly surpassed.

“We would encourage everyone who has an interest in filmmaking – whether they are Gaelic speakers or not – to get involved and use the resources that are available through TàlantG to help get a film inspiration from the idea stage onto the big screen.”

As well as encouraging more young people to make films, the FilmG team would also like to see more community groups picking up a camera and making films documenting activities, events or people in their own locality.

To provide support for individuals and groups FilmG offer a range of resources which are available online and a variety of training workshops.

Picture caption: Dòmhnall Eòghainn MacKinnon with teenagers from the Isle of Skye at the FilmG 2014 launch.

FilmG is project managed by Cànan, the creative media, language resource and design company based at the Fàs Centre at on the Isle of Skye.

There are two main competitions in FilmG, one for adults with no previous director or producer broadcast credits and one for entrants aged between 12 and 17. This is to ensure that the project focuses specifically on bringing new talent to the fore. Both competitions will culminate in a gala awards ceremony. For more information on FilmG please visit www.filmg.co.uk.