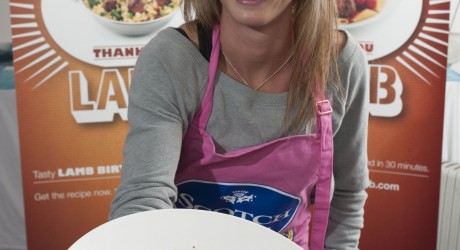 The high-impact campaign aims to change shoppers’ perceptions about lamb and firmly establish lamb’s credentials as easy to cook, versatile and a perfect ingredient for Scots’ weekly shopping lists.

The six-week campaign will include prime-time radio adverts as well as print advertising and a new microsite – www.whambamlamb.com – featuring six ‘how to’ videos showing how quick and easy cooking with lamb really is.

Among the ‘cook in under 30 minutes’ dishes featured in a 16-page new recipe leaflet are lamb meatballs, kebabs, biryani, burgers and stir-fry.

The Scotland-wide campaign, which has been partly funded by the Scottish Government, will see brand ambassadors tempting consumers with lamb recipes in retailers around the country, including Asda, Tesco, Sainsbury and Costco. It will also feature billboard advertising displaying the six colourful new adverts.

Launching the campaign in Edinburgh today was 23 year-old world champion curler, Eve Muirhead, who is hotly tipped for a gold medal at the 2014 Winter Olympic Games in Sochi, Russia.

Miss Muirhead is a remarkable young athlete who skipped the GB curling team at the Vancouver Olympics at just 19 years-old.

She is highly respected in the world of sport for her exceptional work ethic and passion and she is a fantastic ambassador for Scotland – a world class curler, champion piper and a scratch golfer!

Having just flown back from a team trip to the USA, Miss Muirhead demonstrated how simple it is to cook speedy, tasty dishes with Scotch Lamb – even with jetlag!

Describing herself as a ‘stir-fry queen’, she showed how easy it is to cook a lamb stir fry and ranked Scotch Lamb biryani as among her favourite recipes featured in the QMS campaign.

Having grown up on the family farm in Highland Perthshire, Miss Muirhead has had plenty hands-on experience of farming and is well aware of the hard-work and dedication which goes into producing top quality Scotch Lamb.

However, despite her rural roots she admits that before her involvement in the QMS campaign, lamb made only a rare appearance on her shopping list.

“I have a really busy lifestyle, like a lot of people, and I certainly wouldn’t describe myself as a great cook so this campaign has really brought home to me how easy it is to cook quick, nutritious lamb dishes without any fuss,” said Miss Muirhead.

“I have a pretty full-on training schedule and I understand the importance of eating well in terms of my performance but I’m not great at planning meals and I don’t have the patience for tricky recipes.

“The great thing about these lamb dishes is they can be thrown together with very little effort – making the most of ingredients in the kitchen cupboard.”

Miss Muirhead’s parents, Gordon and Lin, farmed near Kinross when she was very young, before the family moved to Orchilmore Farm near Killiecrankie where her brothers Glen and Thomas are now also involved in the family farm.

“Two years ago, I started to really focus on my diet as part of my training regime and I always go for quality meat and buy Scotch Beef and Scotch Lamb.

“As a result of eating better I definitely have a lot more energy which helps me feel confident and positive.”

“Our key aim with this campaign is to encourage Scots to see how quick and easy it is to make great lamb dishes any day of the week.

“Scots eat much less lamb per capita than elsewhere in the UK so we will be encouraging them to make Scotch Lamb a regular purchase by tempting them with dishes which can be cooked in half an hour or less.”

A direct marketing campaign will see 38,000 recipe leaflets delivered to target consumers and over 600,000 Scotch Lamb inserts will feature in key food and lifestyle magazines.

Social media will also play an important part in the campaign which features short videos showing how to cook a selection of simple dishes. Highly regarded chef Graeme Pallister, who runs an acclaimed restaurant in Perth, is featured cooking Scotch Lamb in the three-minute ‘how to’ videos.