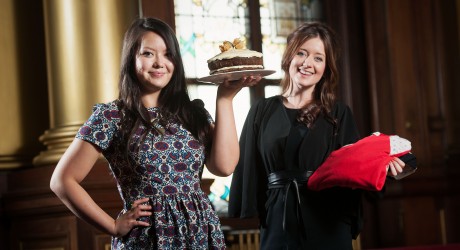 The 26 year-old founder of The Haven café in Edinburgh was announced as regional winner at a ceremony hosted by City of Edinburgh Council at the City Chambers last night.

She was presented with a £1,000 cash prize by Stuart Macdonald, managing director Seric Systems, previously supported business sponsors of the winner’s award.

The Haven café in Newhaven is not just any ordinary café. In just over a year, The Haven has been transformed from a dilapidated building into one of Edinburgh’s best eateries – scoring even more impressive reviews on Tripadvisor than any of Edinburgh’s Michelin star restaurants.

Natalie Kwek always wanted to start her own business and decided to turn her baking hobby into her dream job two years ago with a start-up loan from the PTYBS.

Overseeing the renovation of her new found premises, Natalie set about sourcing chairs, tables, antiques, bunting and an assortment of vintage-style china tea-cups and crockery.

Providing cosy, welcoming surroundings, Kwek and her nine-strong team have earned glowing reviews for their hearty Scottish breakfasts, sandwiches and tea-time favourites, including scones, pancakes and cakes – all of which are freshly baked and prepared by Natalie herself.

The runner up is 27 year-old Fiona Mackay, founder of Fiona Heather, a made-to-measure clothing service in Edinburgh.

Fiona established her business in 2011, initially specialising in a collection that would appeal to the high street consumer at affordable prices.

The collection, available from the Godiva boutique in Edinburgh, completely sold out within two months.

Keen to build on the obvious demand for her label, the young designer approached the PTYBS for a loan to help launch an online shop where she could promote her new collections.

Fiona works collaboratively with Edinburgh-based fine artist Kate Mackay, whom she commissions to produce illustrations, which are introduced to her designs to add a playful element to traditional cuts.

One of her most popular items is a ‘must have’ cape retailing at £125, which features a bird print.

This has been an outstanding success and has made the collection instantly recognisable.

Fiona Heather is attracting a growing following of fans, and more recently has secured interest from a boutique owner in America who would like to stock her collection overseas.

Speaking at the awards ceremony, Prince’s Trust Youth Business Scotland regional manager, Jane Kerridge, said: “Both these young entrepreneurs have exemplified determination, the will to succeed and the ability to turn a good idea into a viable business.

“They are great role models for other young people and deserving winners of these awards.”

Commenting, Stuart Macdonald, of Seric Systems, said: “As previous recipients of the Trust’s support, we are delighted to be recognising and rewarding the achievements of these two inspiring individuals through these awards.”