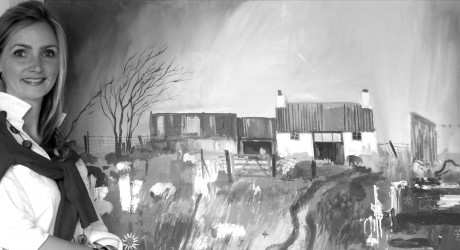 A NEW art exhibition celebrating ten years of the Cairngorms National Park opens this weekend at Eden Court in Inverness.

Aviemore artist, Ann Vastano, once again exhibits her latest art works in a solo show in the Highland ‘capital’, following the success of last year’s collection at the Greig Street Studios.

Ann was born on the Island of Islay in 1972, and was brought up on Rothiemurchus Estate, near Aviemore and continues to work across the river at her studio at High Range at the southern edge of the village.

Having trained at Grays School of Art Aberdeen, her work can be found in private collections including the Royal Bank of Scotland and the Scottish Parliament, but for the month of October some of Ann’s latest paintings, drawings, pastels and mixed media works will be on exhibition at the Stalls Gallery – Eden Court.

Speaking ahead of the opening of her exhibition, Ann said: “The art works on display are part of a show case which celebrates the tenth anniversary of the Cairngorm National Park.

“In 2003, I was commissioned to create an artwork to celebrate the launch of the National Park, so it seems fitting to mark this special occasion with this further collection.

“This new body of work is part of a lifelong passion to create art inspired by the spectacular surroundings of the Highlands. The exhibition includes some new wildlife studies, landscapes and cottages.

“I am especially fond of the wee tumble down cottages which speckle our landscape. A few of which I have captured for posterity, as after a few bad winters they will be no more.

“On this occasion, owing to the large venue that is Eden Court I have worked on some larger pieces – which has been very challenging but thoroughly enjoyable! Lots of colour, wild places and changeable weather all feature!”