Media Release: Panto is on the way – Oh yes it is! 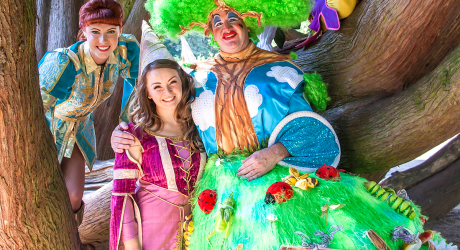 THE schools are back, the nights are drawing in, the sun has vanished and a lot of strangely-dressed people are gathering together; it can mean only one thing – panto season is on its way!

The cast of Eden Court’s spectacular family pantomime Sleeping Beauty all got together fort he first time last week for the photo shoot with lots of laughs, mess and mayhem the inevitable result!

Greg Powrie (Nanny Knot) who last donned a dress at the Eden Court two years ago to play one of the Ugly Sister’s in Cinderella was very excited about meeting his fellow cast members and trying on his costumes for the first time.

“I love getting to meet the other cast members as it takes away some of the first day nerves when you go into rehearsal. Once you have thrown a few custard pies at each other at the photo shoot you are like family!”

Greg continues: “I am also really excited about the fabulous costumes I will be wearing this Christmas. I have one which is tartan with bagpipes, so very Scottish, and one that is like a whole woodland scene all in one dress with a massive tree top head piece – it is absolutely amazing.”

Arron Usher will be appearing in his first pantomime for Producer’s Imagine Theatre as Muddles, the court jester, and the photo shoot saw him demonstrate his juggling skills (or lack of them)!

“I was trying to juggle for one of the pics and I just kept dropping the balls all the time which the other cast member seemed to find quite amusing. I am hoping they won’t want me to do too much juggling in the show!”

Lorayne McLucas returns to the venue for the second year to play Princess Belle. “I am thrilled to be back at the Eden Court again as I had a great time in Mother Goose last year.

“I think I’ve got it quite easy this year as I am asleep for most of the second act while everyone else has to run around trying to rescue me!”

Sleeping Beauty is a panto full of magic and fun and runs from Tuesday 3 December 2013 – Sunday 5 January 2014.

Don’t get caught napping – tickets for Sleeping Beauty are on sale now and are selling well.

For more information call the Eden Court box office on 01463 234234 or visit the website www.eden-court.co.uk