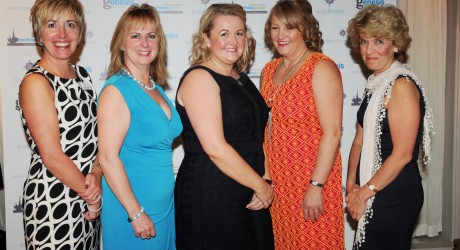 A SPECIALIST recruitment and property development firm has teamed up to successfully raise £3,500 for a North-east cancer charity to mark its 30th anniversary.

Genesis Personnel and Northbey Power, along with their sister business, Waterloo Quay Properties, raised vital funds for CLAN Cancer Support at a client evening hosted at The Silver Darling restaurant in Aberdeen to coincide with Offshore Europe.

The three companies, which provide onshore and offshore recruitment solutions to clients across the world, as well as premium office accommodation in the city, held a raffle prize draw with a range of prizes donated by other local businesses, as well as auctioning off two signed and framed football shirts from Aberdeen and Rangers football clubs.

There was also a special prize draw for a pair for diamond earrings.

Wendy Marr, managing director of Genesis Personnel and Northbey Power, based in Aberdeen and Peterhead, said: “As we were hosting our client evening for Offshore Europe, we thought it would be a perfect opportunity to raise some funds for CLAN’s 30th anniversary year.

“Our raffle and auction were a great success with everyone and their generosity will go towards supporting CLAN to continue delivering its crucial services in Aberdeen and Aberdeenshire.”

“We are continually overwhelmed by the generosity of local businesses, as without these donations we wouldn’t be able to provide our service throughout the North-east of Scotland.

“This year, we are celebrating our 30th anniversary, so it is even more poignant to receive such great support from local businesses in the city.”