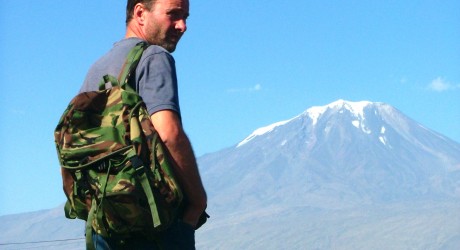 My Brother the Ark Raider

THE family of a Scottish man missing for three years in Turkey hope a new BBC ALBA documentary about his disappearance will trigger a fresh search for him.

Donald Mackenzie, from Stornoway, was hunting for the remains of Noah’s Ark on Mount Ararat in Turkey when he disappeared in 2010.

His family has heard nothing since and several searches by Turkish authorities have failed to discover any trace of him.

Now, on the third anniversary of Donald’s disappearance, a new documentary is to be shown that it is hoped will help in the search for answers.

My Brother the Ark Raider, a Plainview Films production for BBC ALBA in association with Creative Scotland, follows Donald’s younger brother Derick as he leaves his family in Stornoway and travels across Europe to Dogubayazit, a Kurdish town on the border with Iran at the foot of Mount Ararat.

Narrated by the Gaelic broadcaster, Angus Peter Campbell, the film is a poetic and meditative exploration of hope in the face of great loss.

Donald, an evangelical adventurer, had returned to the town repeatedly for more than a decade to search for the Biblical ship’s remains.

When he vanished he was alone on the mountain, without a guide, without a permit and with the weather closing in.

He could have fallen or succumbed to the extreme weather. He could have been attacked by wild animals, robbed by bandits, or crossed the paths of the Army or the Kurdish separatists who both operate on the mountain.

He could have been targeted for his Christian beliefs, or by rogue guides keen to exploit the story of Noah’s ark.

Derick travels to Dogubayazit to try to discover what really happened.

He meets many of those who knew his brother who have their own ideas about what might have happened to him.

His search takes him to the car pound where police have held Donald’s van, and to some of his brother’s possessions that a shepherd claimed to have found at an abandoned campsite.

And ultimately, the search leads to the foothills of Mount Ararat, the mighty mountain which dominates the plains of eastern Turkey and where the Bible recounts Noah’s Ark finally came to rest after the flood waters subsided.

Derick goes in search of answers. But who can he trust and how close will he come to the truth?

With unique access to the Mackenzie family, the film is a moving story of kinship, friendship, trust and coming to terms with loss.

Margaret Cameron, channel editor, BBC ALBA, said: “We were delighted to work with Plainview Films and Creative Scotland as partners on this film which we hope will take Donald’s story to a wider audience.”

My Brother the Ark Raider, produced and directed by Jonathan Carr and Chris Marks for Plainview Films, will be broadcast on BBC ALBA at 9.00pm on Thursday 3 October 2013.

More information about the programme is available at www.facebook.com/MyBrotherTheArkRaider or @arkraiderdoc