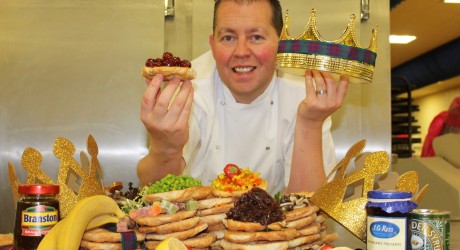 AN award-winning Aberdeenshire chef has revealed plans for a star-studded fundraising event for the North-east hospital which cared for his late father.

Chef proprietor of Eat on the Green, Craig Wilson, is hosting three events in one day at Udny Green, near Ellon, with a number of undisclosed television celebrities, set to attend A Day with the Stars and A Night with the Stars.

The fundraising extravaganza on Saturday, 2 November, in aid of Friends of Insch Hospital will kick off with a competition to find the best crowning glory for the North-east’s most iconic delicacy.

Mr Wilson, fondly known as the Kilted Chef, has teamed up with Inverurie based bakery, J.G. Ross, to launch the Crown the Bonnie Buttery Competition in a bid to discover the most popular and unusual topping for the much-loved rowie.

The battle to be crowned the King or Queen of the buttery will take place at the Udny Memorial Village Hall from 10am-12noon with budding chefs encouraged to create a masterpiece to be scrutinised by the panel of judges, including, George Ross of J.G Ross, Highland Chocolatier Iain Burnett, Eat on the Green’s Craig Wilson, with more names to be confirmed nearer the event.

A VIP lunch with the secret celebrities will take place at Eat on the Green Restaurant, followed by an exclusive dinner event with the stars in the village hall.

The trio of events has already secured support from a number of high profile Scottish businesses including J.G. Ross and The Highland Chocolatier.

Mr Wilson is driven to raise funds for the local hospital after they cared for his late father who passed away after battling cancer in May 2012.

He said: “We are all very excited about our upcoming fundraising event and equally thrilled to team up with J.G. Ross for the buttery competition as my dad was one of their first employees and worked at the bakery for more than 40 years.

“We have some very special guests coming along to judge and join us at our VIP lunch and dinner so it is great to have their support at this fantastic event. We hope to raise as much as we can for Insch hospital, whilst having lots of fun.”

J.G. Ross said: “We hand make more than 86,000 butteries a week, which shows how popular they are in the North-east, so we are expecting lots of competitors of all ages to come along.

“It will be a great day out for all the family to enjoy and also interesting to see how everyone likes to top their buttery with their favourite, and I am sure, unusual topping.”

It will cost £2 to enter the Bonnie Buttery competition, with butteries supplied by J.G Ross on the day; however, competitors are required to bring along their own toppings.

Entry forms can be picked up from any J.G. Ross shop and forms will also be available on the day.

For more information about the fundraising event and buttery competition, please contact Dianne Smith from J.G. Ross on 01467 623951 and Craig Wilson from Eat on the Green on