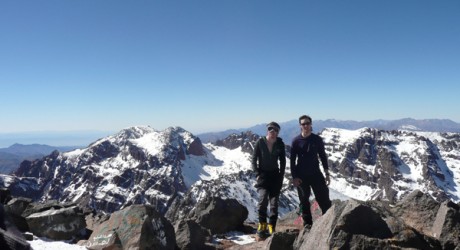 A STUDENT who scaled the difficulties associated with dyslexia and developed skills as an experienced mountaineer has been named as West Highland College UHI Student of the Year.

William Rowland recently completed a BA (Hons) in adventure tourism management through the University of the Highlands and Islands. The 23 year-old from Cawdor Village was praised for his hard work and positive attitude as well as personal achievements as a mountaineer.

William was nominated for the award by his lecturer, Matt Groves, who is also programme leader for the adventure tourism management course.

He explained: “Will was diagnosed with dyslexia in 2011. Despite this, he worked with real integrity to achieve a 2:1 honours degree. He was a significant driving force in his module group, critically challenging theoretical perspectives and setting an excellent example to his peers in engaging in group discussion and personal study.

“He completed an extraordinary trip to the Atlas Mountains of Morocco, gaining first ascents of several alpine-sized ice climbs in full winter conditions.

“Will also left a legacy for the student community by being at the forefront of the development of the university mountaineering club and being its first president.

“He has an ability to turn words and ideas into action and has a natural and unaffected style of leadership. Will’s presence has been an inspiration for others and he has been a positive influence in the college.

“His affable personality and quick smile will be missed, but his influence will remain.”

Speaking about his award, William said: “I feel I am more pragmatic than academic and ensure I gain an understanding of how things work – even if it takes forever! When people you respect say such nice things about you, it’s awkward to take them seriously! I was astounded that I was chosen.

“The award could have gone to many of my fellow peers who work hard and probably deserve it more than myself.”

“He is an inspiration to other students in terms of his resilience to the challenges he has met and overcome, and he has succeeded in making a significant contribution to wider college life through his leadership of the mountain club and his participation in other student activities.

“Will’s success is already evident in his employment by ‘Outdoor Capital of the UK’ as project officer for Lochaber Ideas Week and I wholeheartedly congratulate him on this achievement and wish him every success for the future.”

William will be presented with his Student of the Year certificate and a cheque for £150 at the West Highland College UHI graduation ceremony on Friday 25 October.

He will also go forward as a candidate for the overall University of the Highlands and Islands Student of the Year award.

Now he has finished his studies, William has been working as a freelance mountain leader and mountain bike guide, has been gaining experience with different outdoor organisations and is saving up to undertake more climbing trips.