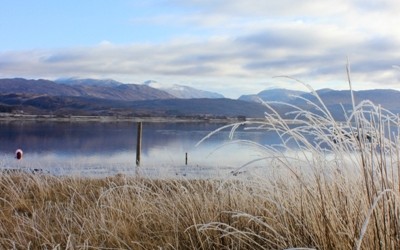 A MAN and his dog – who embarked on a six-month trek in the Scottish wilderness for housing and homeless charity, Shelter Scotland – is launching a calendar featuring photos from his adventure.

After he lost his home of nine years, Wayne Hall (46) decided to trek around Scotland with his dog, Jerry, to raise awareness of housing issues.

The trip started at Loch Morar in the Highlands in February this year, and finished at Loch Ken in Dumfries and Galloway. Wayne’s challenge raised over £5,000 for Shelter Scotland.

The self-employed tiler from Staffordshire lost his home after his landlord died and the property was sold. After realising that anyone can become homeless, the adventurer decided to raise funds for the worthy cause.

The task involved Wayne, camping out in all weathers in what was the coldest Spring in 50 years.

Now, the calendars, which feature dramatic photos of scenery and wildlife, are due to be sold with all proceeds going to Shelter Scotland.

Wayne said: “The scenery and wildlife on our trek was simply stunning and made the challenge all the more pleasurable. Scotland really does have a wealth of natural beauty and taking the photos for the calendar was one of the highlights of my trip.

“It was a pleasure to raise money for Shelter Scotland, especially after finding myself with my own housing issues, I realised how easy it is to end up homeless or in bad accommodation.

“I’ve already had interest in the calendars, and we are sending them all over the world, some as far afield as Australia, USA, Canada and Dubai.

“Overall, it was a great challenge to be involved in and I would do it all again for Shelter Scotland.”

Graeme Brown, Director Shetland Scotland, added: “At a time when funding for our vital services is under threat, fundraisers like Wayne make a real difference.

“It was such a fantastic achievement to complete the trek and the calendar is a great way of raising more funds for our cause.

“This calendar will make an excellent Christmas present, the photos are simply stunning and I would urge anyone to buy one and make a real difference to help people in poor housing and crisis this winter.”

Wayne plans to repeat his fundraising efforts next year. In April 2014, he is due to travel to the Hebrides with his tent, dog, camera and canoe again – all to raise money for Shelter Scotland.

The calendars will be available at the beginning of November.

They can be ordered simply by messaging the www.facebook.com/6monthsinscotland page. The cost per calendar is £4.95, plus postage and packing.