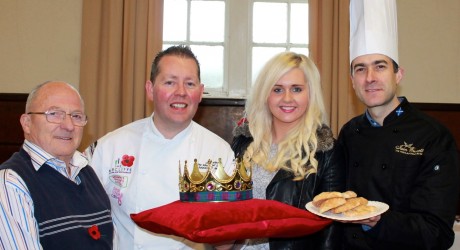 AN award-winning Aberdeenshire restaurant has raised more than £12,000 for a local hospital, with a star-studded fundraiser.

Eat on the Green, owned by the ‘kilted chef’, Craig Wilson, hosted three events in one day at the restaurant and village hall in Udny Green, which included a buttery topping competition and a VIP lunch and dinner with the stars, all in aid of Insch hospital.

The fundraiser, which was organised by Craig and his family in recognition of the care that Craig’s late father received at the hospital last year, took place on Saturday 2 November, with several famous faces in attendance, including stars from Emmerdale, and captain of Aberdeen Football Club, Russell Anderson, and former Dons manager, Craig Brown.

The restaurant kicked the fundraising event off with a culinary challenge, in association with Inverurie based bakery, J.G Ross, to discover the most popular topping for the North-east’s much-loved snack.

Further celebrations took place at the award-winning restaurant, as Craig and his team hosted a VIP lunch and dinner, sponsored by Inverurie Garden Centre, where guests were given the chance to rub shoulders and dine with actors from Emmerdale.

However, the real stars of the day were the nurses from Insch Hospital who were treated to the red carpet treatment at the lunch and dinner.

Mr Wilson, said: “We wanted to say thank you the nurses and the team at Insch hospital for their help and support, and after discovering the hospital was facing potential closure, we wanted to do something.

“As my father worked for J.G Ross for 40 years, we decided to do a buttery topping competition, which was a great success, along with the lunch and dinner.

“I want to say thank you to everyone who helped organise and help with all the three events as we really couldn’t have done it without them, and I am so pleased we managed to raise so much.”

Chair of Friends of Insch, Alasdair McCallum, said: “The Friends of Insch Hospital and community are delighted with the successful fundraising event organised by Craig and his family, and we would like to say a personal thanks to Craig and all the sponsors.

“The hospital was built after the First World War through donations from the community and individuals, so events like these really replicate the original story of the construction of our Memorial Hospital in 1922.

“It was especially heartening to have the involvement of our hardworking nurses, who were treated like royalty throughout the event, which they are certainly going to remember for a long time.”