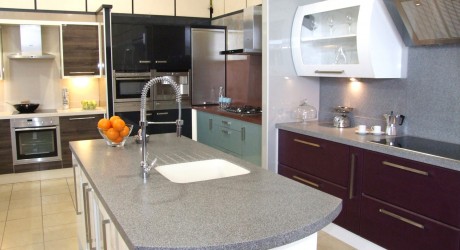 FOLLOWING an upturn in sales of almost 30 per cent in less than nine months at its Glasgow showroom, Rearo, one of the UK’s leading manufacturers and suppliers of solid surface and laminated worktops, is to invest a six-figure sum in its network of trade counters across the country.

In late 2012, the Glasgow outlet was completely refurbished and moved away from the traditional trade counter model to offer a spacious and more inviting look.

The transformation is being credited for the sales hike, which coincides a marked increase in the firm’s female customer base.

The upgraded Glasgow outlet in Govan re-opened in March this year.

New features include in-store design sets, the look and feel of which are more usually associated with those found in major DIY retail outlets.

This more consumer friendly layout is believed to be the reason why the Rearo outlet is enjoying a sales boost, as the surroundings have proved attractive to female customers who traditionally would not use trade counters.

Bosses at Rearo are now hoping to mirror the success enjoyed in Glasgow by recreating these more ‘female friendly’ showrooms, across their network of branches in Inverness, Rosyth, Newport and Gateshead.

Graham Mercer, MD of Rearo, notes: “Traditionally, females are the driving force when it comes to home improvements, making the majority of the decisions about what to buy and this appears to be consistent with the sales increase we have enjoyed in Glasgow.

“Whilst we have retained our existing client base, we cannot ignore the fact that the upturn in sales is almost 100 per cent down to an increase in cash sales from non-trade customers, the majority of whom have been female.

“With that in mind, I believe it makes sense to take the Glasgow model and replicate it across our other branches.”

The refurbishment programme is now underway and the Rosyth branch of Rearo will be the next to re-open with the new look, with the others expected to be completed before the end of the year.