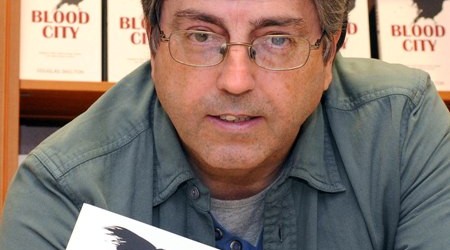 DOUGLAS Skelton will be at the Avenue Shopping Centre in Newton Mearns to discuss Blood City, his latest book, in an event organised by Waterstones at Primavera on Wednesday 27th November between 7pm and 8.00pm.

Blood City, the first in a series of four novels set in Glasgow’s underbelly, is a fast-paced thriller set in 1980, just as the heroin trade was beginning to boom in the city.

The author points out that the background of the book, the explosion of the heroin trade in the early ’80s, is based on a piece of Glasgow criminal folklore.

“There is a story that in the early 80s, a handful of top crooks in the city came together to form a cartel to help build the heroin trade,” said Skelton. “It grew from there.

“I’ve run with that idea, but the real story deals with a young guy called Davie McCall with a bad past and a bloody future – until he meets a girl. The question he asks himself is – can he change? Can he push his past and his present out of the way to change his life?

“But there are forces at work that will conspire to keep him mired in the violence and double-dealing of the criminal world. Because, quite often, not everything is as it seems.”

He has appeared on a variety of documentaries and news programmes as an expert on Glasgow crime, most recently in the Glasgow programme of ‘Gangs of Britain’ with Martin and Gary Kemp.

Blood City is his first foray into fiction.

To book a space at this free event contact Waterstones or Primavera Bistro in the Avenue.