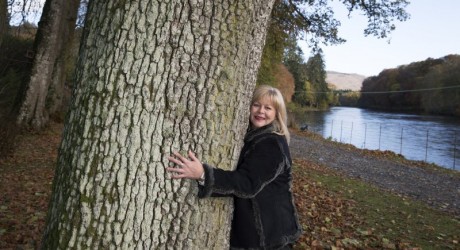 TEN locations spanning the length and breadth of Scotland have now signed up to be part of a national attempt to set a new World Record for Tree Hugging on Sunday 1st December.

Begins a spokesperson: “Ten members of Scotland’s Tree Trail have all put their names down to participate in the event and, between them, are hoping that over 1,000 people across Scotland are ‘arboring’ amorous feelings towards their local tree collections in a bid to trounce the USA’s recent attempt of 950 tree huggers that is yet to be formally recognised by Guinness World Records.”

Scotland’s tree hugging World Record attempt will take place simultaneously across the ten separate sites, on Sunday 1st December 2013 at midday, marking a culmination of events celebrating National Tree Week in the UK and the Year of Natural Scotland.

The original record for the World’s Largest Tree Hug was set by Forestry Commission England on 11 September 2011, in an event that brought together 702 people hugging trees at the Delamare Forest in Cheshire to celebrate the International Year of the Forests.

“The sites who have risen to the challenge are a unique collection that demonstrates Scotland’s standing and global importance in forestry, arboriculture and tree conservation. This record attempt is a perfect opportunity to celebrate the Year of Natural Scotland, mark National Tree Week and to have a bit of fun in the process.”