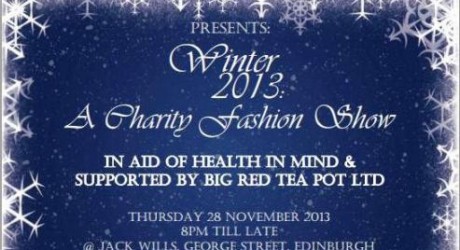 The show will raise funds for Scottish charity, Health in Mind, and is supported by Big Red Teapot Ltd.

Marc Jordan, the Jack Wills Edinburgh store manager is delighted to be raising funds for Health in Mind.

He said: “The idea of the show was brought to us by Health in Mind volunteer, Alastair Murdie.

“Alastair is a recent law graduate and he, along with many other young people, is giving some of his time to the charity which promotes positive mental health and wellbeing in Scotland.

“This is our first show in Edinburgh and we know it’s also a first for Health in Mind.”

The show is from 8pm until late with tickets including complimentary drinks and canapés. VIP tickets (£15 including goody bag and entry to the after-party) and standard tickets (£7) are available from Health in Mind at 40 Shandwick Place or the Jack Wills store in George Street. The Official After-Party is in the Opal Lounge.

Health in Mind’s community fundraiser, Katherine Sellar, is looking forward to the event.

She said: “Alastair came up with the idea and on the first day, he spoke to Jack Wills about staging the show and on the second day, the Big Red Teapot offered to provide the catering.

“It is going to be a great evening with some fabulous silent auction lots to bid on as well.”

Health in Mind was recently awarded the Investing in Volunteers Award for the second time.

Doreen Graham, Health in Mind Communications Manager on 0131 243 0137 or doreen@health-in-mind.org.uk.

Jack Wills was launched in 1999 in Salcombe, Devon, designing British heritage-inspired goods for the university crowd. They continue to be influenced by the best of British, from our history and culture to sporting and country pursuits. They take pride in using the finest quality materials, techniques and design to deliver our distinctive connection between the old and new, epitomising what it is to be young and Fabulously British.

From the iconic British university towns of Oxford and Cambridge, the Ivy League campuses of Harvard and Yale, and the bright lights of Hong Kong, Jack Wills is travelling the globe proudly planting the Union Jack at over 80 stores and counting. http://www.jackwills.com/en-gb/home