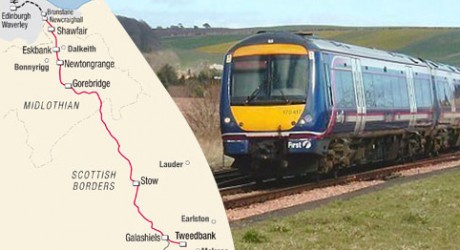 THE Campaign for Borders Rail (CBR) has welcomed news that the guidance issued by Transport Scotland for the next ScotRail franchise requires the new operator to adjust the Borders Railway timetable to accommodate tourist charter trains – opening the way for these to operate on Saturdays, the peak demand day for charters.

Says a spokesperson: “Previously, it had been feared that the largely single-track railway would only have capacity for charters in the evenings and on Sundays, when ScotRail frequency dropped from half-hourly to hourly. Transport Scotland’s Draft Invitation to Tender for the ScotRail franchise [1] specifies (in Section 2.6) that: ‘The Scottish Ministers consider that it is desirable to allow the operation of charter and tourist services by other operators on [the Borders Railway] to promote tourism. The Franchisee will be required to facilitate such operation, and co-operate through alterations to its regular timetabled service, at no additional cost.'”

“Ever since the original Scottish Borders Railway Feasibility Study in 2000 failed to consider tourist train potential, CBR has been consistently pressing the case for this important rail market to have access to the Borders.

“Last year, together with Claudia Beamish MSP, we were instrumental in convincing Transport Minister, Keith Brown, that the platform tracks at the Tweedbank terminus should be lengthened to accommodate commercially viable charter trains [3], but our own research [4] had shown that route capacity had to be made available in the middle of the day on Saturdays to allow the Borders Railway to properly tap the charter market.

“This latest announcement is the last piece in the jigsaw, and now the Borders and its many tourist attractions [5] will be able to welcome trains from across Britain bringing valuable additional visitor spend to the regional economy.”

Amongst the first charters likely to use the Borders Railway when it opens in 2015 are steam-hauled specials, since Transport Scotland’s Draft Invitation to Tender for the ScotRail franchise also specifies that:

“The Scottish Ministers intend that the opening of this railway should be a major celebration for the Borders and Midlothian communities along its route. The opening ceremony is expected to include celebratory steam hauled services. The Franchisee is required to cooperate with the organisation of this event.”

[1] For Transport Scotland’s Draft Invitation to Tender for the ScotRail franchise, see from http://www.transportscotland.gov.uk/news/Rail-franchise-plans-unveiled .

[2] The Campaign for Borders Rail (CBR), launched in 1999, is one of Britain’s most successful grassroots rail campaigns. CBR’s key aim was realised on 6th November 2012 when the Scottish Government’s Transport Minister Keith Brown announced that Transport Scotland and Network Rail had concluded a deal to construct the new Borders Railway – bringing trains back in 2015 after an absence of more than 45 years. CBR lobbying was also crucial to securing key enhancements to the original official railway specification – (i) inclusion of a station at Stow, and (ii) redesign of Tweedbank station to accommodate long tourist charter trains, bringing in visitors from across Britain. See http://www.campaignforbordersrail.org/ .

[3] Following a meeting with Claudia Beamish MSP and CBR representatives on 4th October 2012, on 6th November 2012 Transport Minister Keith Brown announced that the platform tracks at the Tweedbank terminus tracks would be extended to accommodate 12-coach charter trains (with locomotives at front and rear, as there will be no ‘rounding loop’ at Tweedbank) with a total length of 285m.

[4] Research by CBR and the Waverley Route Trust in early 2010 found that in 2009 there were more than 80 charter train arrivals at Scottish destinations (excluding football/rugby specials and the Royal Scotsman luxury land cruise train). The single most popular destination was Edinburgh. Two-thirds of the 80+ tourist charters came from English towns and cities. 51 per cent of the trains arrived at Scottish destinations on Saturdays, and just 18 per cent on Sundays. The research concluded that some 80 charter trains annually (including the Royal Scotsman) could visit the Borders Railway annually. In subsequent years, the volume and pattern of the charter train market in Scotland has not changed significantly.

[5] Tweedbank station will be just over a mile from Sir Walter Scott’s Abbotsford home, and will also offer ready access to the River Tweed, Melrose and Borders Abbeys. The Borders Railway itself will offer a highly scenic journey, climbing from Edinburgh to the 880’ Falahill Summit in the Moorfoot Hills and then descending through the valley of the Gala Water to Galashiels and crossing the River Tweed to reach Tweedbank, overlooked by the Eildon Hills.