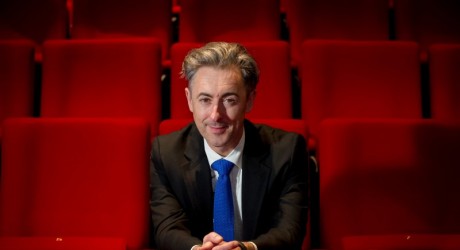 The former derelict bingo hall at the heart of the town lay empty for almost ten years and was bought by The Friends of The Birks Cinema, a charitable organization formed by the local community with the intent to transform the building into a modern cinema, restaurant and café bar.

Staying at the recently opened five-star Fonab Castle Hotel in Pitlochry, Alan and his family enjoyed a relaxing afternoon amidst the stunning scenery of Highland Perthshire before heading to the red carpet event later that evening.

Accompanied on the evening by his husband Grant Shaffer, a well-known graphic artist and illustrator, Scotland’s Machar and playwright Liz Lochhead, and veteran Scottish actor Ralph Riach, Alan’s arrival in Aberfeldy brought a touch of Hollywood glamour to his place of birth.

The cinema’s supporters and funders gathered in formal black tie to celebrate with the star, including the project’s award winning architect, Robin Baker of Robin Baker Architects, whose work on the regeneration has earned a place on the shortlist for Scotland’s Building of the Year 2014.

Also joining the star on the red carpet was Charlotte Flower, a local chocolatier and a driving force behind the highly successful fundraising campaign.

For more information on The Birks Cinema please visit www.birkscinema.co.uk

For further information on The Birks Cinema please contact Tricia Fox on 07989 955039 or t.fox@volpa.co.uk

•             2010: Fundraising continues throughout the year with FoTBC approaching trusts, funds and local businesses for support.

•             2013, April: Construction work is completed and the keys are handed over from Scott Hadden, chair of Hadden Construction to Paul Foley, general manager of The Birks Cinema.