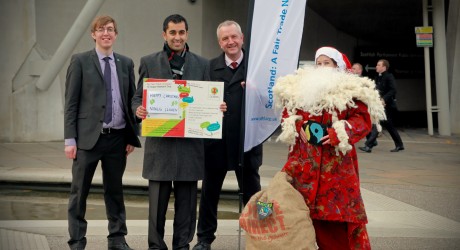 “The response has been incredible with adults and children alike sharing inspiring messages about what the Fair Trade Nation means to them. We’ve had songs and sonnets, statements and sketches and the Fair Trade Wales office has never looked so colourful.”

First Minister of Wales, Rt Hon Carwyn Jones, said: “I would like to congratulate campaigners across Wales as we celebrate five years as a Fair Trade Nation. I am delighted that this transformative concept is spreading throughout the world with Scotland declaring Fair Trade Nation status this year. Thanks to the leadership shown by the people of our small nations, we confidently look forward to being joined by other Fair Trade Nations in the future.”

Humza Yousaf MSP, Minister for International Development, said: “I’m proud to receive these greetings and messages of support from one of the world’s first Fair Trade Nations to another.

“This will be Scotland’s first Christmas as a Fair Trade Nation. As people in all parts of the country get ready for the festive period, today’s visit is a timely reminder that we can all do our bit to address poverty and help to protect families and communities around the world, simply by making informed choices about the gifts and provisions that we buy.”

The Scottish Fair Trade Forum was founded in 2007 to help Scotland become one of the world’s first Fair Trade Nations, which was achieved in February 2013. Through its work with other Fair Trade bodies in the UK and beyond, the organisation engages directly with many Fair Trade groups, schools, universities, local authorities and others to support ongoing fair trade activity and encourage it to grow stronger.