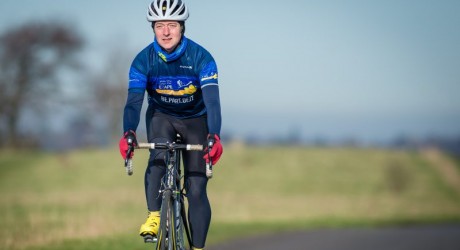 TOUR de France TV presenter, Ned Boulting, whose family live in Harburn near Livingston, will travel from London to Scotland to take part in the Marie Curie Cancer Care Etape Caledonia, and use the experience to prepare for his biggest presenting job of the year.

Eight weeks before the 2014 Tour starts in Yorkshire, Boulting – who has worked at the Tour de France since 2003 – will tackle in the 81-mile closed road cycling event alongside over 5,250 other participants.

He said: “I have never cycled in a group up there so it will be a real pleasure to go on closed roads and experience that rare opportunity of feeling the benefits of drafting and taking turns, which you only get in sportive circumstances.

“I’ll have to work quite hard at it but I hope I have a level of base fitness that I will get round. I’m not training to break any records or get any times, I just hope I suffer as little as possible and get round!

“So it would be nice at the very least to have opportunities between now and then to test myself on some climbing. I’m terribly bad at descents, I’m worse at going down than going up! I just sit on the brakes and close my eyes!”

And while in the area, Boulting plans to ‘kill two birds with one stone': “I have family in the area and definitely plan on paying them a visit while I am up for the event.”

The event, which starts and finishes in the Highland Perthshire town of Pitlochery on the 11th May, will give him a great chance to experience pelotons, descents and hill climbing on the infamous ‘Shehallion’.

Plus, the opportunity to speak to the enthusiastic spectators and participants, who range from novice to club athletes, will no doubt help him to understand his intended audience better.

“It’s important that presenters of the Tour understand how participants and fans in the UK experience cycling and what they can relate to. I’d like to think I can get inside the heads of the average cycling fan and I do see my role on the Tour de France as being their representative, as in, ‘If I were there, I would want to know this’.”

The sports presenter is lucky to have a spot in the event which sold out of general entries in just seven hours and is looking forward to experiencing the route, which is widely regarded as one of the most stunning in the UK and gives cyclists a chance to ride in pelotons on safe, closed roads.

The established Marie Curie Cancer Care Etape Caledonia, now in its eighth year, was the first closed road cycling event in the UK and has been immensely popular in recent years with entries selling out in less than 48 hours as over 5,250 riders race to gain their spot on the start line.

Those wishing to enter the event can still get a place via the Etape Doublé package option which combines entry into the Etape Pennines and Etape Caledonia with a discount of £20.

James Robinson, managing director at IMG Challenger World, said: “We’re thrilled to have such a respected and knowledgeable cycling authority onboard for the 2014 event and hope to help in Ned’s preparations for what will be a fantastic summer for cycling in the UK.”

Marie Curie Cancer Care is the official charity partner of the Etape Series.

Etape Caledonia and Etape Pennines both encourage participants to raise vital funds, which enable Marie Curie Nurses to provide more free nursing care and support to terminally-ill people and their families in communities across the UK.

“We hope that in 2014, cyclists taking part in the epic Etape challenges will also raise funds to help us provide even more free care and support to terminally ill people and their families across the UK.”

MEDIA RELEASE issued by Volpa. You too can post media releases (aka press releases), on allmediascotland.com. Email here for more information.