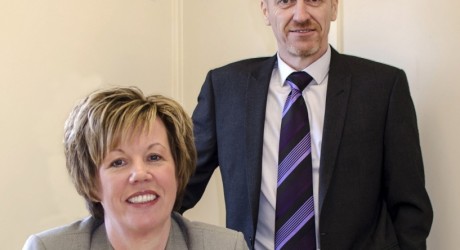 A LEADING Aberdeenshire marine equipment specialist has made two key management appointments as it continues to experience significant growth.

Motive Offshore, which is headquartered in Boyndie, near Banff, Aberdeenshire, has appointed, Colin Murray, as head of finance, while Moira Stickle will manage the human resources team.

Since launching in 2010, the firm, which specialises in the manufacturing and rental of high-capacity winches, wire rope spooling and inspection, umbilical deployment equipment and specialised subsea equipment has experienced exceptional growth.

The company recently launched its fully operational base in Stavanger, Norway operating as Motive Services AS and also opened a sales office in Aberdeen, to accommodate an increase in client demand.

The two appointments increase Motive’s team to 76 across its three offices, and Mr Murray and Mrs Stickle will be based at Motive’s Boyndie HQ.

Mr Murray brings more than 20 years of experience to the role, previously specialising in planning strategies and controlling operations within other organisations that have experienced rapid growth.

He will be responsible for devising and implementing financial strategies to support Motive Offshore as it continues to quickly expand.

Mrs Stickle has more than 15 years of experience in HR and will take responsibility for the on-going recruitment and development of the workforce.

Director of Motive Offshore, Bob Smit, said: “Colin and Moira’s years of knowledge in their individual areas of expertise will be invaluable as the business continues to expand rapidly and it is crucial that we have both key strategies and experienced people in place as we successfully develop our services across a global market.”

Mr Murray added: “Motive Offshore has quickly gained a reputation for excellence across the UK and Western Europe, and I am extremely pleased to be joining such an ambitious, forward thinking team.

“My previous experience of operating within organisations that are experiencing rapid growth, and developing sound financial strategies, will support the business as it continues to expand into the Norwegian market and further afield.”

Mrs Stickle continued: “The value that Motive Offshore places upon its staff and its commitment to developing the workforce is very much in line with my professional approach to HR.

“It is an exciting time to be joining Motive as it continues to increase staff numbers and expand into new premises and countries, and I look forward to playing a key role in the development of personnel over the coming years.”